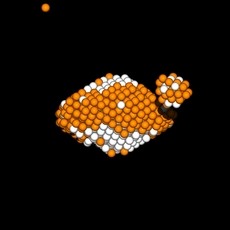 Newswise — Asteroids with moons, which scientists call binary asteroids, are common in the solar system. A longstanding question has been how the majority of such moons are formed. In this week's issue of the journal Nature, a trio of astronomers from Maryland and France say the surprising answer is sunlight, which can increase or decrease the spin rate of an asteroid.

Derek Richardson, of the University of Maryland, his former student Kevin Walsh, now PoincarÃ© Fellow in the Planetology Group in the CassiopÃ©e Laboratory of CNRS at the Cote d'Azur Observatory, France, and that group's leader, co-author Patrick Michel outline a model showing that when solar energy "spins up" a "rubble pile" asteroid to a sufficiently fast rate, material is slung off from around the asteroid's equator. This process also exposes fresh material at the poles of the asteroid.Â

If the spun off bits of asteroid rubble shed sufficient excess motion through collisions with each other, then the material coalesces into a satellite that continues to orbit its parent.

Because the team's model closely matches observations from binary asteroids, it neatly fills in missing pieces to a solar system puzzle. And, it could have much more down-to-earth implications as well. The model gives information on the shapes and structure of near-Earth binary asteroids that could be vital should such a pair need to be deflected away from a collision course with Earth.

Finally, the authors say, these findings suggest that a sample return mission to such a binary asteroid could bring back exposed pristine material from the poles of the parent asteroid, providing a chance to probe the internal composition of an asteroid without having to dig into it.

Solar Spin PowerIt's estimated that about 15 per cent of near-Earth and main-belt asteroids with diameters less than 10 kilometers have satellites. Scientists have determined that these small binary asteroid pairs were not formed at the beginning of the solar system, indicating that some process still at work must have created them.

"It was at first thought the moons in these asteroid pairs probably formed through collisions and/or close encounters with planets," said Richardson, an associate professor of astronomy at the University of Maryland. "However, it was found that these mechanisms could not account for the large number of binary asteroids present among near-Earth and inner main belt asteroids."

Recent studies have outlined a thermal process " known as the YORP effect after the scientists (Yarkovsky, O'Keefe, Radzievskii, Paddack) who identified it " by which sunlight can speed up or slow down an asteroid's spin. Widespread evidence of this mechanism can be seen in the "notable abundance of both fast and slow rotators among [near-Earth asteroids] and small main belt asteroids," Walsh, Richardson and Michel write in the Nature paper.

The trio modeled different types of 'rubble pile' asteroids -- chunks of rock held together by gravity. This work, supported by the National Science Foundation and NASA, as well as the European Space Agency and the French National Planetology Program, is the first to show how the slow spinup of such asteroids leads over millions of years to mass loss that can form binaries.

"Our model almost exactly matches the observations of our test case, binary asteroid KW4, which was imaged incredibly well by the NSF-supported Arecibo radio telescope in Puerto Rico," Walsh said.

Asteroid Deep ImpactsÂ  "Based on our findings, the YORP effect appears to be the key to the origin of a large fraction of observed binaries," said Michel. "The implications are that binary asteroids are preferentially formed from aggregate objects [rubble piles], which agrees with the idea that such asteroids are quite porous. The porous nature of these asteroids has strong implications for defensive strategies if faced with an impact risk to Earth from such objects, because the energy required to deflect an asteroid depends sensitively on its internal structure," he said.

Doublet craters formed by the nearly simultaneous impact of objects of comparable size can be found in a number of places on Earth, suggesting that binary asteroids have hit our planet in the past. Similar doublet craters also can be found on other planets. Â

The authors say that their current findings also suggest that a space mission to a binary asteroid could bring back material that might shed new light on the solar system's early history. The oldest material in an asteroid should lie underneath its surface, explained Richardson, and the process of spinning off this surface material from the primary asteroid body to form its moon, or secondary body, should uncover the deeper older material.

Michel added, "Bringing back pristine material is the goal of our proposed Marco Polo mission, which is currently under study by the European Space Agency, in partnership with JAXA in Japan."