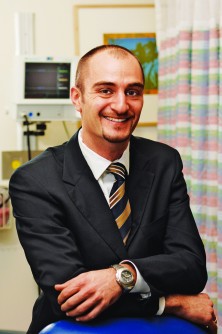 Newswise — The use of peripheral nerve blocks (PNBs) is associated with better outcomes following hip and knee replacement, according to a study at Hospital for Special Surgery (HSS). Researchers compiled data on more than one million joint replacement patients who received a PNB in addition to general anesthesia or epidural anesthesia. Those who received the nerve block had fewer complications after surgery.

The study, selected as a "Best of Meeting" winner, will be presented at the Annual Regional Anesthesiology and Acute Pain Medicine Meeting on April 2 in New Orleans.

The role of anesthesia techniques and resulting outcomes among the millions of patients undergoing orthopedic surgery have recently gained widespread interest on a public health care level, according to Stavros G. Memtsoudis, MD, PhD, lead investigator. "Previously, a number of studies have shown superior outcomes in patients receiving spinal or epidural regional anesthesia compared to general anesthesia," he said. "In our study, we set out to determine the impact of peripheral nerve blocks (PNBs) - another mode of regional anesthesia - on outcomes and complications."

A peripheral nerve block entails the injection of an anesthetic near a specific nerve or bundle of nerves to block sensations of pain from a specific area. Peripheral nerve blocks have previously been found to improve pain control after joint replacement, but this is the first large study to determine the impact of PNBs on outcomes, according to Dr. Memtsoudis, an attending anesthesiologist and senior scientist at HSS.

For their study, researchers conducted a retrospective review of more than one million hip and knee replacements performed between 2006 and 2013 using data collected by Premier Perspective. The database contains information from approximately 3,000 hospitals in the United States.

Investigators compiled information on complications, including cardiac, pulmonary, gastrointestinal and renal. They also determined the rate of infections, wound complications, and inpatient falls. In addition, they collected data on "resource utilization," which included the number of blood transfusions needed, admission to an intensive care unit, opioid consumption, length of hospital stay, and the cost of hospitalization.

In the study, 342,726 patients had a hip replacement and 719,426 had knee replacement surgery. Researchers found substantial variation in the utilization of peripheral nerve blocks, which were more frequently used in teaching hospitals and large hospitals with more than 500 beds.

Overall, 18% of the patients in the study received a peripheral nerve block. Despite the low utilization, researchers identified an increasing trend of PNB use among knee replacement patients: from 15.2% in 2006 to 24.5% in 2013.

Dr. Memtsoudis notes that although the study was somewhat limited by the analysis of secondary data, the findings provide evidence of the benefits of PNBs and warrant further research.

"The joint replacement population includes an elderly group of patients with co-existing medical conditions that put them at risk for complications, and it is important to find ways to minimize the risk," Dr. Memtsoudis notes. "In addition, the volume of joint replacements is projected to grow dramatically in the future. Considering the relatively infrequent use of PNBs, our study results suggest that a wider implementation of regional anesthetic techniques could potentially have a major positive impact on both medical and economic outcomes."