Newswise — The Focused Ultrasound Foundation is honored to recognize Sunnybrook Health Sciences Centre in Toronto as a Centre of Excellence.

“With an unparalleled team of scientists and clinicians, Sunnybrook has been in the vanguard of focused ultrasound innovation, making groundbreaking progress on many fronts,” says Foundation chairman Neal F. Kassell, MD. “They are a model for other sites – not only because of their world-class knowledge and experience, but also for the collaborations that they have forged with institutions across specialties and geographies.”

Sunnybrook has one of the most comprehensive and successful focused ultrasound (FUS) research programs in the world, with technical, scientific, and clinical experts accelerating progress. The Centre is led by pioneering physicist Kullervo Hynynen, PhD and neurosurgeon/scientist Nir Lipsman, MD, PhD. “In one institution, we have all of the key players and expertise to advance a pipeline from hypothesis to idea generation, technical development, preclinical modeling, and on to clinical trials and commercial treatment,” says Lipsman. “I think that it is truly unprecedented.”

The support for FUS emanates from the top. “Focused ultrasound is one of the jewels in the crown at Sunnybrook,” says Barry McLellan, Sunnybrook’s President and CEO. “Our vision as an academic health sciences centre is to invent the future of health care, and we believe that with focused ultrasound, we truly are inventing the future. This is not just for the patients we treat here; we are having an impact around the globe.”

There are 10 principal investigators leading studies to advance focused ultrasound at Sunnybrook. Collaborating with them are dozens of highly skilled technical, engineering, biological sciences, and clinical research personnel. Much of the work is conducted under the umbrella of Sunnybrook Research Institute’s Centre for Research in Image-Guided Therapeutics, which spans 150,000 square feet of laboratories, facilities, and clinical space. They have several MRI systems (3T and 7T preclinical), custom FUS systems, a Philips body system, and an Insightec Neuro brain system. The Canadian government has contributed $75 million to the Centre, with an additional $86 million in private and institutional investments.

Sunnybrook’s program includes research in neurology, neurosurgery, urology, orthopedics, gynecology, radiation oncology, and biomedical engineering. Dr. Hynynen credits teamwork within the institution and across the field for creating such a research powerhouse. “To help get focused ultrasound to benefit as many patients as possible, we are very open to collaboration,” he says. In the past five years, Dr. Hynynen has published more than 80 papers with an excess of 160 investigators from over 30 institutions. He adds, “This work cannot be done at just one center, and that is where I see the Focused Ultrasound Foundation as being so instrumental in stimulating collaboration and progress.”

The team is making headway in two parallel tracks: enhancing the technical side of focused ultrasound to make it as safe, efficient, and as widely accessible as possible; and expanding clinical applications by identifying the medical conditions that are the most appropriate for the technology.

Advancing New Approaches in the ClinicSunnybrook’s focused ultrasound clinical research program is robust, with trials open for Parkinson’s disease and movement disorders, bone metastases, head and neck cancer, rectal cancer, and brain tumors. Following their participation in pilot and pivotal studies leading to the recent regulatory approval by Health Canada, they are also building a commercial practice to treat patients with essential tremor.

In concert with their technical colleagues, the clinical team has broken important new ground in the field, including publishing the first Canadian human experience with FUS to treat essential tremor. They were also the first site in the world to use FUS to non-invasively and temporarily open the blood-brain barrier (BBB) in a patient to deliver chemotherapy to a brain tumor.

Momentum is building with studies planned in the near future to explore the feasibility of using FUS to open the BBB in patients with Alzheimer’s disease, and to create ablative lesions for obsessive-compulsive disorder, depression, and other conditions.

Pushing the Boundaries in Physical and Biological SciencesThe science and engineering teams at Sunnybrook are poised to make breakthrough progress in expanding the potential of FUS, particularly for central nervous system (CNS) disorders. “The CNS is enormously fertile ground where the impact of this technology is going to happen, including in the spinal cord,” says Michael Julius, PhD, Vice President of Research. “We have the oracle of technology development (Kullervo Hynynen) creating next generation technology, an extraordinarily strong platform for drug discovery and target validation, and a seamless interface with the clinical team to advance these discoveries into the clinic.”

Neuroscientist Isabelle Aubert, PhD, is leading a team of 15 people conducting critical research in FUS for CNS disorders. Her laboratory is assessing preclinical models for immunotherapy, cell therapy, and gene therapy in Alzheimer’s disease. In collaboration with other scientists, Aubert and Hynynen are developing FUS therapies for Parkinson’s disease, and amyotrophic lateral sclerosis (ALS or Lou Gehrig’s disease).

Drs. Aubert and Hynynen work closely together to assess methods for adapting the technology to address the challenges of neurobiology and treat many CNS diseases. “Focused ultrasound has amazing potential for treating disorders of the brain and spinal cord,” says Dr. Aubert. “In addition to delivering critical therapeutics to neural tissue, we are exploring using the technology to promote glial and neuronal plasticity, which can enhance function.” She is continually assessing preclinical studies that can be developed into clinical trials – examining which therapeutic to deliver into the brain; evaluating the effects of FUS with microbubbles on BBB permeability and brain tissue; and testing functional outcomes related to treatment with FUS and microbubbles, with and without therapeutics.

The VisionIn many ways, the Sunnybrook team is gearing up for redefining the potential for FUS. They will be instrumental in the next wave of discoveries. “We have provided the team with the requisite resources – space, technology, and investment from many stakeholders,” says Dr. McLellan. “What is really special is the relationship between the researchers and the clinicians – neurosurgeons, psychologists, oncologists, and scientists. That is the secret sauce – the team sees a common vision – science and clinical impact.”

About Focused Ultrasound Focused ultrasound uses ultrasonic energy guided by real-time imaging to treat tissue deep in the body without incisions or radiation. Multiple intersecting beams of ultrasound are directed and concentrated on a target; much like a magnifying glass can focus multiple beams of light on a single point. Where each individual beam passes through the tissue, there is no effect. But, at the focal point, the convergence of the beams of focused ultrasound energy results in many important biological effects depending on the nature of the tissue and the ultrasound parameters.

Today, focused ultrasound is approved in the United States to treat uterine fibroids, reduce pain from bone metastases, and treat the prostate. The technology is in various stages of research and development for more than 50 diseases, including Parkinson’s, Alzheimer’s, hypertension, and tumors of the brain, liver, breast, and pancreas. 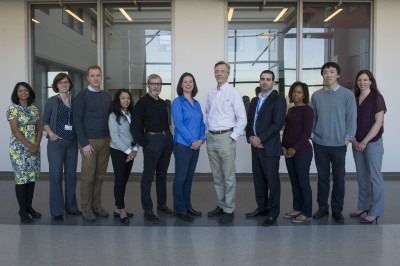 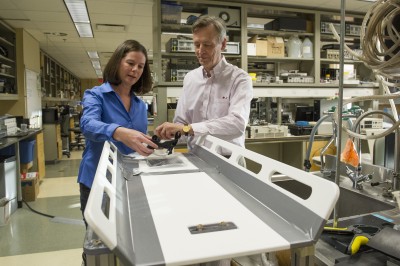