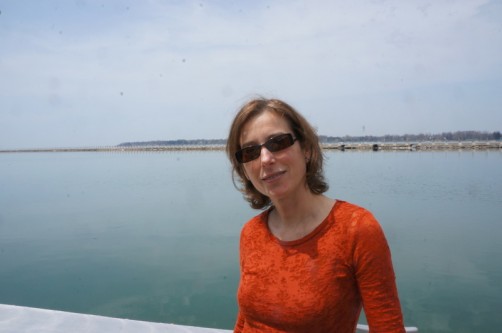 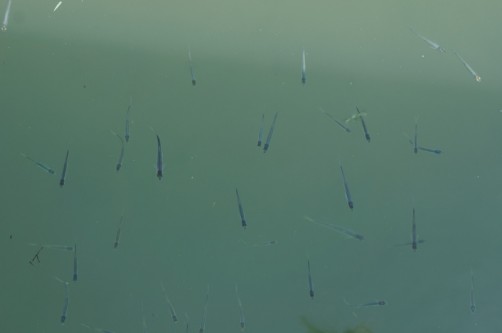 Emerald shiners on the move in the upper Niagara River, May 2014. 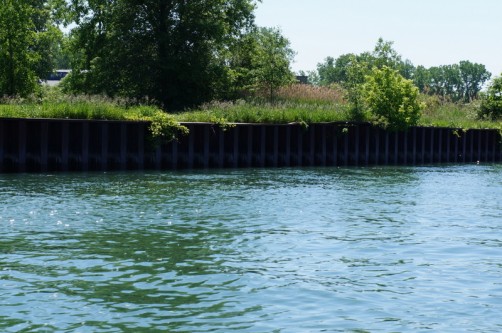 One of many bulkheads lining the Niagara River shore (summer 2013). 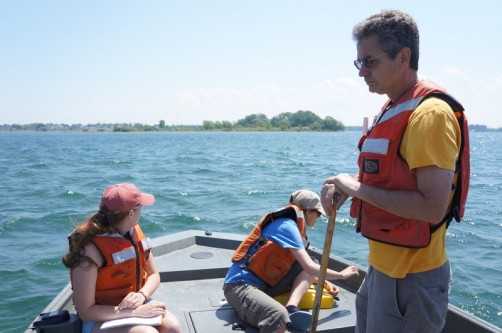 Newswise — Scientists at SUNY Buffalo State are taking the lead in a $2 million project to safeguard the environmental health of the upper Niagara River for the Western New Yorkers who use it for bird-watching, kayaking, and recreational sport-fishing. And all that may depend on a small silvery-green fish, the emerald shiner.

Alicia Pérez-Fuentetaja, associate professor of biology and research scientist with the Great Lakes Center at Buffalo State, is the project director. She is an aquatic ecologist who studies food web interactions, particularly in the Great Lakes.

“The emerald shiner, a native fish that’s about three to four inches long, is eaten by many of the sport fish and the fish-eating birds that nest or migrate along the Upper Niagara,” she said. “But we know almost nothing about the shiner ecology in the Niagara River, or whether the available habitat meets their needs.”

Collaborators on the project, representing the New York State Department of Environmental Conservation, the U.S. Army Corps of Engineers, Buffalo Niagara Riverkeeper, the University at Buffalo, Virginia Technical Institute, and the Ontario Ministry of Natural Resources share Pérez-Fuentetaja’s concern. Massive die-offs of emerald shiners occur sporadically, but no one knows why with any certainty.

“To ensure the long-term survival of the emerald shiners and all the fish and birds that depend on them,” said Pérez-Fuentetaja, “we have to understand what they need and determine what is available in the river and try to reconcile those two aspects.”

The fish that feast on shiners in the Niagara include walleye, steelhead trout, and largemouth and smallmouth bass; bird species include the common loon, mergansers, and the threatened common tern. The Niagara River, like the Florida Everglades and the Galapagos Islands, has been designated an international Important Bird Area, and the well-being of the birds that use the river depends on healthy emerald shiner populations.

To investigate the emerald shiner, Pérez-Fuentetaja received a consistency determination to the Niagara River Greenway Plan from the Niagara River Greenway Commission, indicating that the proposed project is in line with the Greenway Commission’s plan. The Greenway Commission’s Ecological Standing Committee, established by the relicensing of the New York Power Authority, awarded the project a $766,448 grant to fund a three-year study; the first-year award was $298,880. Mark Clapsadl, fisheries biologist at the Great Lakes Center and Randal Snyder, biology professor at Buffalo State, are co-principal investigators.

When Pérez-Fuentetaja reached out to area agencies, the U.S. Army Corps of Engineers proposed that the original grant be used to leverage additional funding--to the tune of $1.3 million--from the Great Lakes Restoration Initiative, Remedial Action Plan for the Niagara River Area of Concern. A partnership agreement between Buffalo State and the U.S. Army Corps of Engineers articulates that the Corps of Engineers will provide in-kind services under Pérez-Fuentetaja’s direction to expand the scope of the project. One aspect includes studying the ability of the emerald shiner to migrate back into Lake Erie against the current.

“The emerald shiners appear in the Upper Niagara in large numbers about this time of the year,” said Pérez-Fuentetaja, “but we don’t know their migratory patterns. Our hypothesis is that most of them return to Lake Erie before freeze-up while some overwinter in the river. One of our concerns is that the loss of natural habitat along the Niagara shore imperils their natural movements.”

That’s because the river’s edges, which once provided sloping shorelines where aquatic plants could grow and shelter the shiners, have been replaced by manmade structures. “Vertical bulkheads and concrete structures transform the Niagara from a river to a giant canal where the water speeds through,” she said. “The rapid current in some key areas may be affecting the shiners’ ability to migrate and complete their life cycle.”

As Pérez-Fuentetaja has visited observation sites along the Niagara River, she has met people fishing, paddling, or bird-watching. “These people love this river,” she said, “and it’s an important part of their lives.” As the three-year project unfolds, she plans to reach out to the public through education.

“The ice is flowing through the Upper Niagara now,” Pérez-Fuentetaja said, “and we are getting ready to start sampling right behind it!”