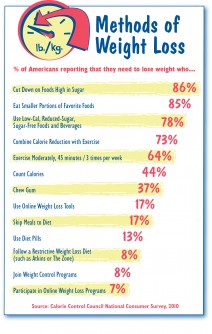 Newswise — ATLANTA (May 18, 2011) – Despite all the recent hype, restrictive diets such as the Dukan Diet and Atkins – and dieting programs such as Jenny Craig or Weight Watchers – appear at the bottom of the list of popular weight control methods, according to a new national survey released this week by the Calorie Control Council (CCC). At the top of the list are cutting back on sugar, eating smaller portions, using low-calorie, sugar-free foods and beverages and combining calorie reduction with exercise.

Regardless of what methods they are using, Americans are getting the message. The CCC survey found 54 percent of Americans trying to lose weight. According to the Centers for Disease Control and Prevention (CDC) National Center for Health Statistics, two-thirds of American adults are overweight or obese. “People are now hearing what health authorities have been saying for years – Americans are too heavy,” says James Hill, PhD, Executive Director of the University of Colorado Anschutz Health & Wellness Center and co-founder of America On The Move.

The results of the CCC survey – of Americans aged 18 and over – are in contrast with much of the recent emphasis and news about royal diets (Kate Middleton’s Dukan diet, for instance, prior to the Royal Wedding) and celebrity dieting programs. Not only are restrictive diets or dieting programs not representative of America, other less popular methods used by those on a diet included the use of online weight loss programs (mentioned by 7% of respondents), using diet pills (13%) and skipping meals (17%). At the other end of the scale, cutting back on foods high in sugar was mentioned most often (by 86% of respondents). Other popular methods of weight control by those trying to lose weight include eating smaller portion sizes (85%) and consuming low-calorie and sugar-free foods and beverages (78%). Also, 73 percent of Americans trying to lose weight say they are combining calorie reduction with exercise.

“Restrictive dieting, such as cutting out certain foods entirely, may work in the short term, but it usually does not pay off in the long term,” says Beth Hubrich, a registered dietitian with the Calorie Control Council. “Be wary of ‘fad’ diets that suggest drastically cutting entire food groups or avoiding certain foods. Although it may be something you can do for the next few months, if it is not something you can maintain over the long haul, be cautious.”

"A good way to start is by stopping any further weight gain by making small lifestyle changes," Hill notes. "Just cutting 100 calories a day can prevent the gradual weight gain experienced by most Americans. Continuing to increase regular exercise and eating smarter by reducing portions, and limiting fat and sugar intake will help in both losing weight and maintaining it. It is important to realize that these healthy changes need to be ones that can be maintained for life."

This nationally projectable survey was conducted in November-December 2010 by Booth Research Services, among 1,203 males and females aged 18 years and older. The sample reliability is plus or minus 2.8 percent at a 95 percent level of confidence. The Calorie Control Council, established in 1966, is an international non-profit association representing the low-calorie and reduced-fat food and beverage industry. The Council has been tracking dieting and weight control habits in the U.S. since 1984. More information is available at www.caloriecontrol.org.