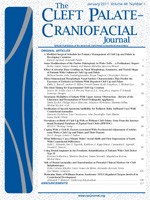 Newswise — The impact of physical attractiveness on social communication is a truth universally acknowledged. It is not surprising, therefore, that individuals with a cleft lip and palate have experienced social isolation and poor self-esteem. But how people really see faces affected by this anomaly has not been studied. Researchers are now seeking a more scientific evaluation of how people look at faces with a cleft lip and palate through the use of an eye-tracking camera.

When looking at a face, the eyes usually fixate on the main features, following a path from one to the next. This occurs in a fixed order, and is known as the scanpath. A typical scanpath has top-down movement, fixing primarily on the eyes, then the nose and mouth. Additionally, it has been documented that viewers will fixate initially and for a longer duration on features that draw on their emotions.

As adults, more than 50% of those with cleft lip and palate have reported dissatisfaction with their facial appearance. Even when surgery to repair the cleft has been performed in infancy with appropriate follow-up therapy, a scar and a distinct asymmetry of the nose remain. Those with a cleft lip and palate would have a stronger emotional connection with these facial features that could explain their different way of viewing a face.