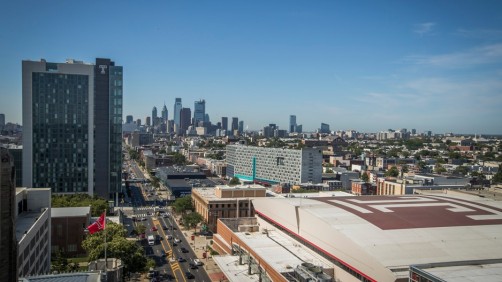 Temple moves up three spots and shines as a “Best Value,” fueled by high graduation rates.

Newswise — Temple University has jumped three spots in U.S. News and World Report’s Best Colleges, the annual ranking of undergraduate programs across the nation.
In the 2018 edition of Best Colleges released on Tuesday, Sept. 12, Temple earned a rank of No. 115 among national universities, equaling a record high established two years ago. Temple has climbed 17 spots in the rankings since the 2012 edition was published, making Temple one of the nation’s top gainers (only 14 national universities have made bigger jumps during that time period). Among public universities, Temple moved up three spots to No. 53, an all-time high.
Temple also earned a No. 92 national rank in “Best Value Schools,” a ranking appearing in Best Colleges for the first time this year. Temple’s “Best Value Schools” rank puts the university above prestigious national public institutions such as California–Berkeley and Georgia Tech, as well as high-profile regional public institutions, including Penn State, Rutgers and Maryland–College Park. The metric that U.S. News weights the most in “Best Value Schools” is a combination of a school’s academic quality and the net cost of attendance for a student receiving the average level of financial aid—the higher a university’s quality and the lower its cost, the better the value.
We are especially pleased that U.S. News is recognizing Temple’s powerful combination of academic excellence and affordability—a value proposition that is central to our mission."
-- Richard M. Englert, president
“What makes Temple’s rise in national rankings so gratifying is that it’s a validation of what the Temple community experiences every day: our unprecedented momentum as an institution,” said Temple President Richard M. Englert. “We are especially pleased that U.S. News is recognizing Temple’s powerful combination of academic excellence and affordability—a value proposition that is central to our mission.”
The 2018 edition of U.S. News Best Colleges highlights sharp increases at Temple in a variety of ranks that are indicators of institutional health, including alumni giving (up 18 spots since last year among national universities), Temple’s reputation among surveyed academic peers (up eight spots) and the university’s reputation among surveyed high school counselors (up eight spots since last year and 34 spots since the 2012 edition). Temple also moved up eight spots in U.S. News’ “Best Colleges for Veterans” ranking.
Graduation rates on the rise
The graduation rates of Temple students, the metric that is weighted most heavily in the methodology behind “Best Colleges,” continues to be a core strength for Temple. The latest edition of Best Colleges reports that Temple’s six-year graduation rate for undergraduates has climbed to 69 percent, one percentage point higher than the rate reported in last year’s edition and nearly six points higher than the rate reported in the 2012 edition.
U.S. News ranked Temple in the top 20 again for graduation rate performance, a measure that compares a university’s expected graduation rates with actual graduation rates. In other words, Temple is graduating hundreds more students than expected every year.
“Temple has been a national leader in graduation and retention efforts, and with programs such as Fly in 4, our innovative initiative to increase timely graduation, we expect graduation rates at Temple to continue to rise,” Englert said. “That’s good news for students, because delayed graduation is a leading cause of student debt.”

Temple also reached unprecedented heights in Washington Monthly’s newly released annual College Guide and rankings, jumping 37 spots to No. 73 in the nation among national universities. Temple also rose 18 spots in Washington Monthly’s “Best Bang for the Buck–Northeast” ranking.
Washington Monthly’s methodology differs from other college rankings by taking into account “contribution to the public good” by schools in three categories: social mobility (recruiting and graduating low-income students), producing cutting-edge research, and encouraging students to serve their country and their communities.
Business breaks more records
The 2018 edition of U.S. News’ Best Colleges also brought more good news for Temple’s Fox School of Business. Fox’s overall rank among undergraduate programs rose to an all-time high rank of No. 45 in the nation, up three spots compared to last year and 17 spots since the 2015 edition. Three individual undergraduate disciplines at Fox again earned spots among the national elite: insurance (No. 8), international business (No. 14) and management information systems (No. 14).
It’s been a good year for Fox in the U.S. News rankings. Earlier this year, Fox’s flagship graduate programs—its full-time Global MBA (No. 32), part-time MBA (No. 7) and online MBA (No. 1)—reached unprecedented heights in U.S. News’ Best Graduate Schools rankings.
Why it matters
Temple’s rise in national rankings has cascading benefits for everyone associated with the university, including students, alumni and faculty, Englert said.
“As Temple’s academic reputation increases, it increases the value of every Temple degree and the competitiveness of every Temple graduate,” Englert said. “It also helps us attract a more talented and diverse student body and recruit more world-class teachers and researchers to our faculty.”