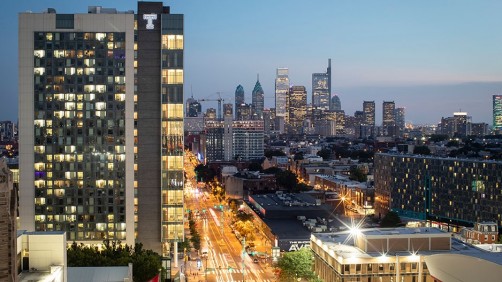 PHILADELPHIA — Temple University’s supporters continue to give at unprecedented levels, contributing to another record-breaking fundraising year for the university.

Gifts made to the university in the fiscal year that ended June 30 totaled nearly $98 million, surpassing the previous year’s record by more than $7 million. The record fundraising year represents ongoing success across a number of areas, including student giving, young alumni engagement, donor retention and major gifts.

“This giving has a huge impact on the campus that we call home,” said President Richard M. Englert, who announced the record fundraising results Sept. 20 during his annual State of the University Address. “Our founder, Russell Conwell, believed strongly in an ethos of giving back rather than hoarding wealth for his heirs, and in that spirit, our alumni and trustees are helping us realize our greatest ideas and our greatest ambitions through their philanthropy.”

Some notable areas of growth include:

This year brought two historic gifts to the university that will continue to benefit the Temple community for generations: a $10 million gift from trustee Steve Charles, KLN ’80, to name the forthcoming Charles Library, and a $4 million gift from Brook J. Lenfest, son of the late Trustee H.F. “Gerry” Lenfest, to establish an eponymous scholarship fund for Philadelphia students.

“These results demonstrate that the depth and number of donors who are willing to consistently invest in Temple University’s mission and future continue to grow,” said Jim Cawley, CLA ’91, LAW ’94, vice president for Institutional Advancement. “We continue to build on the culture of philanthropy we’ve cultivated here.”

Temple Health in particular rounded out one of its best fundraising years on record, raising $37 million in support of education, patient care, research and service to the community, $20 million of which was raised by the Lewis Katz School of Medicine.

The Katz School’s alumni donor rate of 16 percent is among the highest of any school or college at Temple. Notable gifts at the Katz School this year included seven new endowed scholarships, $7.3 million of which were pledged in bequests that will benefit future students, and two seven-figure gifts to establish new endowed chairs—one to support Alzheimer’s research and another for Otolaryngology-Head and Neck Surgery.