The Cost of Treating Osteoarthritis in Canada Expected to Quadruple 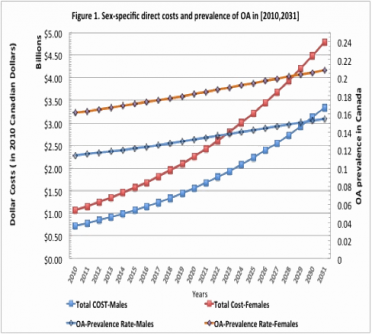 Newswise — WASHINGTON – According to research presented this week at the American College of Rheumatology Annual Meeting in Washington, D.C., the total cost of treating Canadians with osteoarthritis will quadruple over the next two decades to reach $8.1 billion by the year 2031.

Osteoarthritis, or OA as it is commonly called, is the most common joint disease affecting middle-age and older people. It is characterized by progressive damage to the joint cartilage—the cushioning material at the end of long bones. It can cause changes in the structures around the joint including fluid accumulation, bony overgrowth, and weakness of muscles and tendons, all of which may limit movement and cause pain and swelling.

To estimate the number of people in Canada who would be diagnosed with osteoarthritis by the year 2031, researchers from the Arthritis Research Centre of Canada developed a population-based microsimulation – a computer model that creates life histories of all people in the Canadian population in terms of OA risk factors and its burden – called Population Health Model-Osteoarthritis (POHEM – OA). The study used data from the 2001 Canadian Community Health Survey and was conducted to assess treatment and future health care costs for the years 2010 to 2031.

“This is the first time an individual-level simulation model was used in conjunction with a cost-of-illness study to project the direct cost burden of osteoarthritis in the next 20 years,” says Behnam Sharif, MSc, lead investigator in the study and PhD Candidate at the School of Population and Public Health, University of British Columbia in Vancouver, Canada.

Researchers reviewed health care records between 1986 and 2003 that included physician visits, surgical procedures, medication, and all hospital admissions covered by the Medical Services Plan (a government-assisted health insurance plan for British Columbia residents). Surgical procedures related to OA were estimated based on expenses from the St. Paul's Hospital in Vancouver. The researchers then used Canadian Joint Registry data collected between 1997 and 2007 to estimate the total number of hip and knee replacements. Average drug costs (both over-the-counter and prescription drugs) were then estimated by evaluating data for the four main types of drugs prescribed to treat OA (acetaminophen, nonsteroidal anti-inflammatory drugs, cyclooxygenase-2 inhibitors and opioids).

Each patient was assigned a cost variable, which reflects costs of care, based on sex, age, disease activity, orthopedic surgeon assessment, primary joint replacement surgery and any additional surgeries. The researchers entered all of the collected data into the POHEM model and divided medical expenses into two categories – ongoing costs and event-based costs. Ongoing costs were calculated based on the number of years living with the disease. Event-based costs were considered expenses for hip and knee surgeries.

Based on the results of the modeling, total health care costs of treating Canadians with OA were estimated to rise from $1.8 billion dollars in 2010 to $8.1 billion dollars in 2031. The rise in cost was directly associated with an increase in the number of people living with the disease. The model predicted an increase in the number of people with OA from three million (14 percent) in 2010 to 5.8 million (18 percent) in 2031. Other factors that contributed to rising medical costs to treat patients with OA are growing demand for total knee and hip replacements and the aging of the OA population.

“Our research shows that OA will continue to be a major concern for health policy makers in the next two decades, as the baby boomers enter the last decades of their lives. This research also underscores the importance of disease prevention to reduce the burden of OA,” says Mr. Sharif.

The American College of Rheumatology is an international professional medical society that represents more than 9,000 rheumatologists and rheumatology health professionals around the world. Its mission is to advance rheumatology. The ACR/ARHP Annual Meeting is the premier meeting in rheumatology. For more information about the meeting, visit www.acrannualmeeting.org or join the conversation on Twitter by using the official hashtag: #ACR2012.

Editor’s Notes: Behnam Sharif, MSc, will present this research during the ACR Annual Meeting at the Walter E. Washington Convention Center at 2:45 PM on Tuesday, November 13 in Room 202 B. Dr. Sharif will available for media questions and briefing at 1:30 PM on Monday, November 12 in the on-site press conference room, Room 203 A–B.

Background/Purpose:POHEM-OA (Population Health Model-Osteoarthritis) is a population-based microsimulation model that uses Canadian Community Health Survey-2001 to generate the initial population and models every individual's life history in terms of osteoarthritis (OA) diagnosis and treatment for the entire Canadian population. The objective of this study was to incorporate treatment and other costs of OA into POHEM-OA to project the future direct cost burden of OA in Canada for the years 2010 to 2031.

Methods:Average healthcare treatment costs were estimated from the British Columbia (BC) linked health administrative database spanning 1986/87 - 2003/03 that included physician visits, surgical procedures, medication, and all hospital admissions covered by the Medical Services Plan (MSP) of BC. Surgical procedures related to OA were micro-costed based on unit costs available from the fully allocated St. Paul's hospital (Vancouver) cost model. Since the number of hip and knee replacements almost doubled in the last 10 years, replacement rates were recalibrated and a time trend was introduced based on the Canadian Joint Registry database from 1997-2007. Average drug costs (both over-the-counter and prescription drugs) were estimated from the PharmaNet (BC) database in 2003 and the National Population Health Survey for four main types of OA-related drugs (acetaminophen, NSAID, coxibs and opioids). Each patient was assigned a cost variable based on sex, age category, OA stage (defined by OA diagnosis, orthopedic surgeon visit, primary replacement surgery, and revision), and time in each stage. All costs were implemented in POHEM according to two categories: "ongoing costs" as they accumulated based on the person-years of each individual staying in a given OA stage and "event-based costs" for hip and knee replacement surgeries. A 5% annual discount rate was applied. Results: The total direct costs of OA in Canada were estimated to rise from $1.8 billion dollars in 2010 ($0.7 and $1.1 billion dollars for males and females, respectively) to $8.1 billion dollars in 2031 ($3.3 and $4.8 billion dollars for males and females, respectively) (Figure 1). This rise is in part attributable to an increase in the number of persons living with OA, due to increasing OA incidence and general longevity. OA prevalence is projected to increase from 3 million (14%) in 2010 to 5.8 million (18%) in 2031 (Figure 1). Other contributing factors are the increasing number of total knee/hip replacements, greater use of services by patients treated surgically, and the aging of the OA population.

Conclusion: This population simulation model predicts a 350% increase in the total costs of OA over the next 20 years. The model will be helpful in the estimation of the economic consequences of potential changes in the prevailing model of care for persons with OA.