The Genetics of Psychiatric Disorders

The Question of Fruit Flies 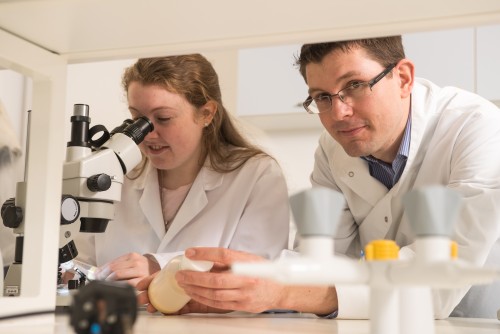 Newswise — While it has long been recognised that genetics – alongside environmental factors – play a role in developing psychiatric disorders, the function of individual genes is still largely unknown. But an international, multi-disciplinary team led by Bournemouth University’s Dr Kevin McGhee is aiming to uncover just that – using fruit flies to isolate and examine the genes involved in the development of schizophrenia, with the hope of improving knowledge and treatments for the condition.

“In psychiatric genetics, a lot of time and money has been invested in large, genomewide studies to find the genes that are involved,” said Dr McGhee, a Senior Lecturer in Health Sciences at Bournemouth University (BU). “Now, we want to find out what the functions of those genes are. If you can do that, the ultimate impact is that you can then design better treatments.” Dr McGhee is the principal investigator of the year-long project, working alongside colleagues from the National University of Ireland, Galway and University of British Columbia, Vancouver.

Students are also playing a part in the Bournemouth University funded project, with a number of dissertation students trained to carry out lab-based examinations of the fruit flies. They will isolate and switch off genes that human data has previously indicated play a role in schizophrenia, before examining the effect on the flies’ nerve cells at different life stages.

“If we can prove that it works and can be applied to human psychiatric genetics, then it helps create a cheap and easy functional model that is beneficial to everyone,” explained Dr McGhee. “I believe what we find out from these genetic studies will help infer what is going on biologically, and that will ultimately lead to better treatment.”

Another strand of the research will help kickstart the use of psychiatric genetic counselling in the UK. Genetic counselling – where patients and relatives are given advice and support around the probability of developingan inherited disorder – has long been used to assess the risks around conditions like Down’s Syndrome and certain cancers.

A psychiatric genetic counselling workshop – the first of its kind – is being held by the research team. It will explore how best to translate the increasing knowledge about the genetics of psychiatric disorders into educational and counselling-based interventions to improve outcomes for patients and their families.

“Genetic counselling will probably expand over the next ten or 20 years and we want to put BU at the forefront, as a UK leader in the field,” said Dr McGhee, adding that the workshop has already attracted interest from around the world. “I think people having that education and training to be able to explain and support people through diagnosis will lead to better treatments and help reduce that sense of stigma and guilt aroundpsychiatric disorders.”

Open access publishing is another way in which Dr McGhee believes that the wider public can benefit and learn from research projects. “Impact is really important for research and open access really helps to achieve that – as anyone can see it, whether they are students, doctors, charities, policy makers, whoever,” he said. “I think, hopefully, another impact of this work will be to better show where we are with this research, which again goes back to open access – helping people to see that there are hundreds of markers and hundreds of genes and they each have a very small effect.

“Ultimately, we want to educate the healthcare professionals, policy makers and eventually the public – the patients and families who suffer from psychiatric diseases so that they are better informed.”