The George Washington University Receives Up to $14.6 Million to Develop Method to Characterize Biological and Chemical Threats 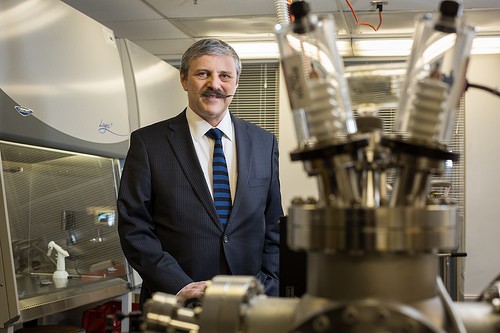 Akos Vertes, George Washington University professor of chemistry in the Columbian College of Arts and Sciences

Video of Akos Vertes and the Laser Ablation Electrospray Ionization (LAESI) technique that will be used for this research: https://vimeo.com/84776540 (enter password AVertesBroll).

Newswise — WASHINGTON—A team led by a George Washington University (GW) researcher will receive up to $14.6 million over five years from the Defense Advanced Research Projects Agency (DARPA) to develop an approach to rapidly identify the root of biological and chemical threats. The researchers are tasked with reducing to 30 days a process that can sometimes take years or even decades. If they are successful, the approach could bolster national security efforts to combat these threats.

“Clearly, this is a very large challenge, and it’s easy to understand why it’s important to overcome,” said Akos Vertes, George Washington University professor of chemistry in the Columbian College of Arts and Sciences. “Discovering the cause behind a biological or chemical threat can provide information that not only counteracts the threat but also provides important information for pharmaceutical companies developing drugs that may be unrelated to the threat.”

Biological threats, such as anthrax, derive from bacteria, while others derive from viruses, toxins or fungi. Chemical threats include substances that work to interfere with the nervous system or even cause asphyxiation. These threats have the potential to cause widespread, rapid injury or death.

To determine how a biological or chemical threat disrupts life functions, researchers must take a holistic view of the threat and the system in which it is working. The team will examine the effects of toxic agents on genes, proteins and cellular functions using the scientific disciplines of transcriptomics, proteomics, metabolomics and bioinformatics to meet the 30-day challenge. By combining an immense amount of data gleaned from these disciplines, researchers believe it will be easier to determine the workings of a given biological or chemical threat in a given environment.

One problem in achieving this, though, is the fact that the field of metabolomics isn’t as well-developed as other scientific disciplines. However, Dr. Vertes and his team at GW recently developed the Laser Ablation Electrospray Ionization (LAESI) technique, which allows researchers to more quickly and effectively learn the chemical composition of a biological sample. The technique was licensed to Protea Biosciences Inc., which developed the commercial product— the LAESI-DP 1000 Direct Ionization System—last year.