The Making of Dig It! the Secrets of Soil Exhibit 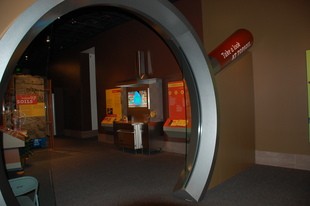 Entrance to the Smithsonian's Dig It! The Secrets of Soil. The making of the scientific and educational exhibition is the topic of a special session held on 8 October at the GSA and SSSA-ASA-CSSA Joint Annual Meeting in Houston, TX.

Newswise — At the 2008 Joint Annual Meeting in Houston, the Smithsonian's Design Team will explain details about the making of the new Dig It! the Secrets of Soil exhibit that recently opened at the Natural History Museum in Washington, DC. Jennifer Bine, Pat Megonigal, and Barbara Stauffer will talk about how the designs were brought to life, the popularity of the exhibit with the public, and planning for the exhibit to travel.

The "Update on the Soils Exhibition Debut," will be held on Wednesday, 8 October from 2:30 to 3:30 pm in Room 381ABC of the George R. Brown Convention Center, Houston, TX.

Texas's state soil, "Houston Black," is featured in the new 5,000-square-foot exhibition. Texas's very own Houston Black soil is proudly displayed as one of 54 soil samples in the exhibition, representing each U.S. state, territory, and the District of Columbia. These soils were selected for Dig It! because of their special significance to each state or region.

The Houston Black soils are characterized as vertisols with high shrink-swell with changes in soil moisture; surface is black clay; sugsoil is black clay with slickensides grading to containing calcium carbonates; substratum is light olive brown clay; form under prairie vegetation in calcareous clays and marls

In the two months since the exhibit opened, an estimated 300,000 people have been though the exhibition. Visitor responses have been enthusiastic, with young children, teenagers, and adults alike commenting on how cool, weird, and interesting soils are. Later this year, the museum plans to conduct a comprehensive visitor survey to asses what visitors are learning as they go though the exhibition. The Smithsonian team hopes to reach even more people with its recent launch of the exhibit web site at http://forces.si.edu/soils/.

Gary A. Peterson, SSSA President said, "As a member of SSSA, you can be very proud of Dig It! as it is truly a world-class exhibition that is already attracting large numbers of visitors, many of whom are under the age of 16. The exhibition is a huge step forward in our efforts to educate youth about soils and to pique their interest in studying soils."

The next step is to take Dig It on the road. SITES, the Smithsonian Institution, Traveling exhibition service, is already preparing the exhibition for a four-year journey across North America, marketing it to a prospective large host museums and science centers. Discussions are proceeding with a several potential venues.

The Geological Society of America (GSA), founded in 1888, is a broad, unifying scientific society with 21,000 members from academia, government, and industry in more than 85 countries. Through its meetings, publications, and programs, GSA enhances the professional growth of its members, and promotes the geosciences in the service of humankind. Headquartered in Boulder, Colorado, GSA encourages cooperative research among earth, life, planetary, and social scientists, fosters public dialogue on geoscience issues, and supports all levels of earth science education.

ASA (http://www.agronomy.org), CSSA (http://www.crops.org) and SSSA (http://www.soils.org) are scientific societies based in Madison, WI, helping their 11,000+ members advance the disciplines and practices of agronomy, crop, and soil sciences by supporting professional growth and science policy initiatives, and by providing quality, research-based publications and a variety of member services.