The Memory Café: A “Safe” Place to Socialize 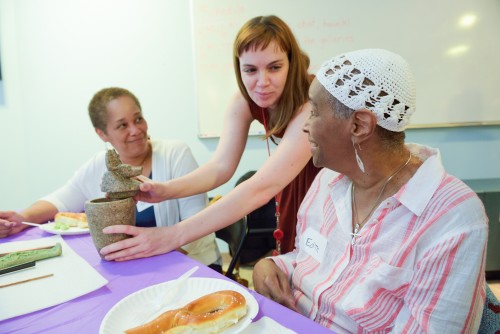 Newswise — At a recent event at the University of Pennsylvania Museum of Archaeology and Anthropology, a group of people sat around four tables, each with Egyptian artifacts as its centerpiece. Museum educators went from table to table explaining – in a highly entertaining fashion – what each artifact signified in ancient times.

What was unique about this “class” was not the topic or the location. It was the audience: members of the Memory Café, a program created by the Penn Memory Center (PMC) exclusively for patients with memory problems, including Alzheimer’s disease, and their caregivers.

Studies have shown that dementia often leads to isolation for both the person inflicted and the caregiver. And feelings of isolation and loneliness can evolve into depression and anxiety. The Memory Café, held each month at Christ Church in Old City since starting this past winter, offers a safe space for individuals to socialize with those who share similar circumstances or concerns.

Dutch psychiatrist Bere Miesen created the first memory cafés in the Netherlands in 1997. The concept quickly spread throughout Europe and crossed the Atlantic Ocean in 2008. Today there are more than 100 memory cafés in this country but Penn’s is the only one in Philadelphia.

“Our goal is to get people out of the house and re-establish social connections and friendships,” said Genevieve Ilg, MSW, LSW, who proposed the idea when she was an intern at PMC while working on her master’s degree at Penn’s School of Social Policy and Practice. She recently graduated but continues to volunteer at the Café. Felicia Greenfield, LCSW, director of Clinical Research Operations and Care Programs at the PMC, continues to run the monthly cafes with Alison Lynn, MSW, LSW, a social worker in the PMC, and new MSW interns at the Center.

It’s easy to see why this population enjoys the cafés. “It offers a stable and safe environment,” Ilg said. But it’s not a support group, she stressed. “The participants are socializing with each other. While they acknowledge and understand that everyone is there for a similar purpose, they come mostly to hang out. It’s a unifying experience.”

“There’s an acceptance,” said Diane Cagan, who attends with her husband, Paul. “In other social situations, you feel like people are watching you. And you’re watching [the patient] – is he embarrassing himself? But you know that won’t happen at the café. That’s the core reason I go.”

Memory cafe edith and kendell hardyThe regular meetings at the church have sometimes included music, supplied by students at the Curtis Institute which Ilg said “has been hugely supportive.” The students play classical music for about 30 minutes, which helps participants relax. Cagan recalled one time arriving at the café thoroughly “hassled” from the effort it took for her and her husband to get there. After the musical performance, “I went over to the cellist and said ‘I know you feel this is helping the person with dementia but your music soothed me as well.’”

Susan Jewett, who comes with husband Carl, loves the “intimacy” of the Café and the cultural activities that accompany the socializing part of the Café. “Some avenues have been cut off because of the diagnosis and changes but it’s fabulous that there are other opportunities popping up,” she said. “That’s what I see in the Memory Café. While some doors are shutting, others are opening.”

“There is a real need for social engagement opportunities, and I am grateful to Genevieve for bringing the idea to the PMC for patients and families,” Greenfield said. “The PMC is fully committed to continuing and expanding Café offerings in the community.” Future programs will include a multimedia presentation from the Jewish Sound Archive of the University of Pennsylvania, a women’s vocal ensemble and other cultural programs.

The gathering held at the Museum – which included a tour of its Egyptian exhibition and listening to the Museum’s “Summer Nights” concert – was the first time the Memory Café was held outside of Christ Church and it was clearly a success. “Learning is so important for people with cognitive issues,” said Kendall Hardy, who was there with her mother. “Cognitive problems tend to close them and ourselves in. These events help total well-being – physical, emotional, and mental.”

Among the several artifacts on the tables was a brain hook, which Egyptian embalmers would use to remove the brain without making any incisions. Examining it, one of the participants mused, “I wish I could use it to scrape Alzheimer’s off my brain.”