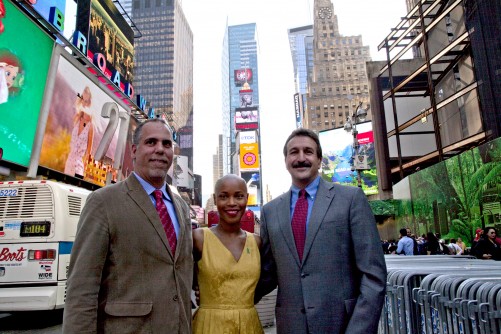 “With Toshiba’s help, we will create more awareness about ovarian cancer which will hopefully result in saving lives,” says Dr. Fishman, professor of obstetrics, gynecology and reproductive science and gynecological oncologist at The Mount Sinai Hospital. “We are very excited to see our important message on one of the biggest screens in the world and I’m extremely grateful to my very talented patient, Valisia LeKae, a Tony and Grammy nominated actress and singer for sharing her story."

Ovarian Cancer is the fourth leading cause of death in American women. Approximately 22,000 women are diagnosed annually and 14,000 die from the disease. “Every day that passes without a cure for ovarian cancer means the suffering and death of countless women,” said Dr. Fishman. “Valisia is one of the lucky ones and she is a fighter.”

“I want to thank Toshiba, The Mount Sinai Hospital, Peter Hapak and Spotco for joining forces to help broadcast the importance of ovarian cancer risk assessment and my personal journey to thousands of men and women who will see it daily,” says LeKae, the 34 year-old actress who played Diana Ross in Motown the Musical and was diagnosed with ovarian cancer in 2013. “Dr. Fishman and the Mount Sinai team helped to save my life, so I want to give back by helping to educate and encourage others about this disease and the fight against it.”About Mount Sinai’s Ovarian Cancer Risk Assessment Program The Mount Sinai Hospital leads an international clinical and scientific effort to identify new screening methods for the early detection of epithelial ovarian cancer in asymptomatic high-risk women. The hallmark of the program is the coordinated, multidisciplinary services provided to each patient with a comprehensive clinic visit including evaluations by board certified specialists in cancer genetics, gynecologic oncology, ultrasound, and psychology. Participants receive a consultation with a board certified genetic counselor that reviews the family history of cancer in detail and provides an estimate of the likelihood of hereditary susceptibility. Women who participate in the program return every six months for follow-up, but remain with their own gynecologists for routine care. As a state-of-the-art clinical research program, the program, has achieved international recognition for scientific insights regarding the genetics, biology and mechanisms of ovarian cancer.To learn more, visit www.mountsinai.org/ovariancancer or call (212) 241- 1111.

Facts About Ovarian Cancer • Approximately 75 percent of women with ovarian cancer are diagnosed with late stage disease and only 15-40 percent of diagnosed patients survive five years after initial aggressive cytoreductive surgery and years of multiagent chemotherapy.• Almost 90 percent of women diagnosed with the disease confined to the ovary (stage I), have an overall five-year survival. They also require less surgical intervention, may not require chemotherapy and have a significantly improved quality of life.

The System includes approximately 6,600 primary and specialty care physicians, 12-minority-owned free-standing ambulatory surgery centers, over 45 ambulatory practices throughout the five boroughs of New York City, Westchester, and Long Island, as well as 31 affiliated community health centers. Physicians are affiliated with the Icahn School of Medicine at Mount Sinai, which is ranked among the top 20 medical schools both in National Institutes of Health funding and by U.S. News & World Report.For more information, visit http://www.mountsinai.org, or find Mount Sinai on Facebook, Twitter and YouTube.