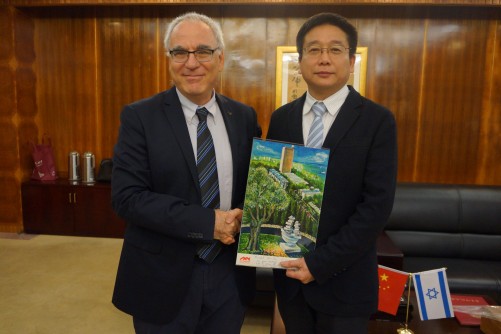 Newswise — The University of Haifa and the East China Normal University (ECNU) in Shanghai signed a memorandum of cooperation on the construction of the Shanghai-Haifa International Research Center, the first of its kind in Shanghai for Israeli and Chinese academia. The joint fields of research already agreed upon include neuroscience, mathematics education technology, computing and data management, and environmental management. The collaboration between the universities will enable Israeli and Chinese researchers to submit research proposals to Chinese research funds.

Collaborations started with officials from ECNU and NYU Shanghai (a branch of NYU that operates within ECNU) visiting the University of Haifa three months ago. During their visit they were introduced to some of the university’s outstanding research centers, which led to the idea of founding a joint research center. It was finally agreed that during the first stage, the center would focus on the fields that the University of Haifa and ECNU share and are both strong in, and as mentioned, the University of Haifa Rector Prof. Faraggi and his Chinese counterpart Prof. Chen Qun signed the memorandum in the presence of the Israeli Deputy Consul General in Shanghai. During the tour, ECNU officials announced that the building currently occupied by NYU Shanghai would be designated to the center, giving the new center “large shoes” to fill. The first delegation will be going to Shanghai in April and will include 20 researchers from the University of Haifa, among them the Dean of the Faculty of Natural Sciences and the Dean of the Faculty of Management, to agree in practice on the first studies to be done by the joint center. As stated, the collaboration will enable researchers to submit research proposals for Chinese funds, and because the Chinese government invests generously in these funds, receiving these grants means receiving high funding (according to estimates, the Chinese government spent 40 billion dollars in grants for Chinese Academic research in 2013. (http://www.the-scientist.com/?articles.view/articleNo/41321/title/China-Shakes-Up-Research-Funding)