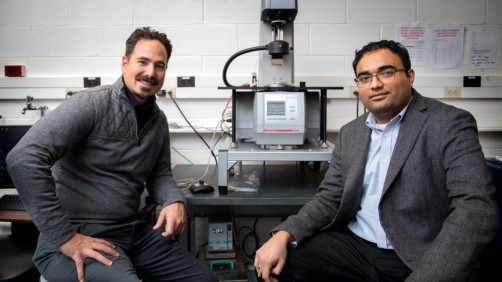 Physics professor Itai Cohen, left, and Abhishek Shetty, lead scientist in rheology at Anton Paar, are shown in Clark Hall Nov. 10 with the MCR 702 rheometer, which the instrument manufacturer has loaned to Cornell.

Newswise — Until this month, if students in Itai Cohen’s research group wanted to perform advanced measurements on a fluid – such as applying both rotation and sinusoidal oscillations to gauge whether the flow disruption was hydrodynamically or contact-mediated – they’d have to drive 330 miles east.

Now, thanks to a loan from instrument manufacturer Anton Paar, Cornell has a state-of-the-art rheometer that will allow those students to perform those experiments on campus.

Anton Paar has provided Cornell with one of its high-end rheometers, an MCR 702 TwinDrive. The instrument will be on loan to Cornell for at least three years, said Abhishek Shetty, lead scientist in rheology at Anton Paar.

Representatives from Anton Paar and the Cornell research community gathered in the basement of Clark Hall Nov. 10 for the official handover ceremony.

“This is a top-of-the-line machine; it’s their latest dual-drive system,” Cohen said of the MCR 702, which comes with instrumentation and accessories that allow maximum flexibility to characterize different types of complex fluids.

Before the arrival of the Anton Paar machine, the ability to perform deep analysis of a fluid necessitated a trip to either the Massachusetts Institute of Technology or Harvard University.

“That’s a six-hour drive for the students; they had to bring down their samples and all that,” Cohen said. “This [new rheometer] now brings that capability to upstate New York, and we could also presumably get people coming from elsewhere to use this machine.”

Cohen said his lab has always had an “open-door policy” when it comes to researchers from other universities, “so everyone from the surrounding area can come and run experiments.”

Anton Paar is eager to push the envelope of what can be measured when it comes to rheology, Shetty said.

“Anton Paar is looking to collaborate with folks who ‘think outside the box’ for novel new ways to use research rheometers,” Shetty said, “especially folks who have a vision for new rheological test method developments which can impact both fundamental and applied research.

“Itai fits the bill very well here,” he said, “and is he is also very well known in the rheology circles.”

Shetty said Anton Paar will collaborate with Cohen’s group on research, and Cornell has agreed to beta test new accessories.

“This is a win-win situation for both parties,” Shetty said, “as the instrument will be used for research, and Anton Paar will not only gain feedback on the device but exposure as well when the results are published.”

Another researcher who will benefit greatly from easy access to the rheometer is Lynden Archer, the James A. Friend Family Distinguished Professor of Engineering in the Smith School of Chemical and Biomolecular Engineering. He is perhaps best known for his work on next-generation lithium metal batteries, but his group also explores fluid dynamics of soft materials, including polymers and gels.

“A common trait of all soft materials is that their structure on molecular and mesoscopic length scales influences their rheology, and vice versa,” Archer said. “Strategies for disentangling this coupling are at the heart of most advances in theory and instrument design over the last two decades.”

According to Shetty, the three-year loan to Cornell includes an option for an additional two years.