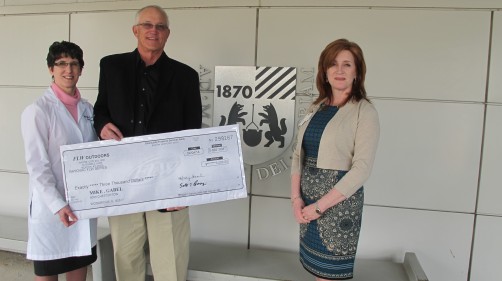 Newswise — When Richay Gabel developed chronic headaches and became forgetful in August 2010, her husband, Mike, took her to local doctors for help. They ran a series of tests and delivered the news the couple feared: Richay had brain cancer.

The Gabels did their research and turned to oncologists and surgeons at Loyola University Health System’s Cardinal Bernardin Cancer Center for more advanced care. A team of physicians removed the tumor in Richay’s brain. She then underwent radiation therapy and remained cancer free for more than two years until her symptoms recurred in May 2013. A more aggressive form of the cancer had returned, making it difficult to operate.

“I determined at that point that if anything happened to my wife, I would do whatever I could to give back to Loyola for caring for her,” Mike said.

Richay and Mike had another eight months together until she passed away in January 2014. Mike, a recreational bass fisherman, turned to his long-time hobby for comfort. He entered tournaments and began winning for the first time.

"Someone special was up there helping me out,” Mike said. “Those bass didn’t stand a chance.”

Mike earned approximately $3,000 from the tournaments. He recently donated these winnings to support clinical research at Loyola’s Cardinal Bernardin Cancer Center. Mike intends to continue competing to give a total of $10,000 to Loyola. The Gabel family is proud of Mike for carrying on Richay’s legacy.

“Mike was always by Richay’s side while she was sick, taking her to her doctor’s appointments and making sure she was taking her medication properly,” said Mara Leone, Richay’s cousin. “In the end, she could no longer walk, so he would carry her. Richay would be very proud that Mike is continuing to help others in her memory.”

The Cardinal Bernardin Cancer Center was the first free-standing facility in Illinois dedicated to cancer research, diagnosis, treatment and prevention. Loyola's cancer center contains all outpatient cancer care along with extensive research laboratories, offices and educational space. Many of the multidisciplinary clinics within the cancer center provide a one-visit, one-team approach, providing patients with a diagnosis and treatment plan in the same day. Patients can see their physician, have lab work done, undergo chemotherapy and have cancer care-related prescriptions filled, among many other services in the building.