Toward Personalized Medicine for Patients with Cystic Fibrosis 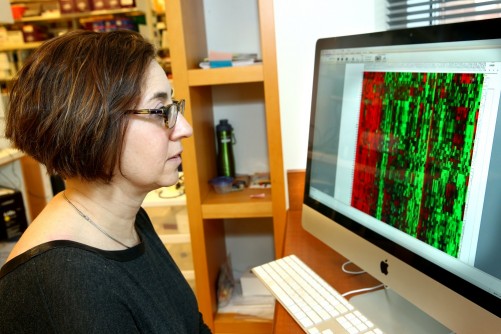 Newswise — For a highly variable disease like cystic fibrosis, personalized medicine promises treatments based on individual factors, down to the molecular level. This promise is especially alluring for the treatment of children with cystic fibrosis, who are at particular risk for complications that could affect them throughout their lives.

A life-threatening, genetic disease, cystic fibrosis progressively damages the lungs and the digestive system. Although DNA screening detects most cases of cystic fibrosis at birth, the disease has a spectrum of severity. These early screening tests cannot currently predict disease severity. Despite recent diagnosis and treatment advances there is still no marker to determine which patients will barely show symptoms and which are at risk for persistent lung infections that can lead to respiratory failure.

“Now we’re flying blind,” says Hara Levy, MD, a physician-scientist at Ann & Robert H. Lurie Children’s Hospital of Chicago, who is trying to map out the molecular underpinnings of what patients with cystic fibrosis experience clinically.

In an ongoing study, she is using samples from cystic fibrosis patients to analyze how sets of genes are expressed over time in relation to disease severity, clinical course, treatment response, as well as a slew of other variables such as age, family history, and specific mutations in the cystic fibrosis gene. Her lab is the only one in the cystic fibrosis field to be doing this kind of cutting-edge research.

“Our ultimate goal is to be able to tailor medical care to individual patients according to their molecular profile differences,” explains Dr. Levy, Director of Pulmonary Research at Stanley Manne Children’s Research Institute, within the Human Molecular Genetics Program, affiliated with Lurie Children’s, and Associate Professor of Pediatrics at Northwestern University Feinberg School of Medicine. She envisions that this tailored medical care could begin as soon as cystic fibrosis is diagnosed.

For example, molecular patterns might be able to signal whether a patient’s lung infection is viral or bacterial, which would determine if antibiotics are necessary. Or, doctors might be able to tell if a child with cystic fibrosis is developing diabetes even before clinical signs appear.

“We are hoping to use patient-specific molecular signatures to predict how the disease manifests and responds to treatment, which would allow us to intervene earlier and more effectively,” says Dr. Levy. This knowledge would also help tailor therapies to maximize treatment effect.

“At this stage, our genomic studies have identified predictive biomarkers that may be targets for treatment of lung severity in cystic fibrosis,” says Dr. Levy. This research is supported by the National Institutes of Health New Innovator Award, the National Heart, Blood and Lung Institute and the Stanley Manne Children’s Research Institute.