Transmitting Data From Space to Earth With Laser Filaments 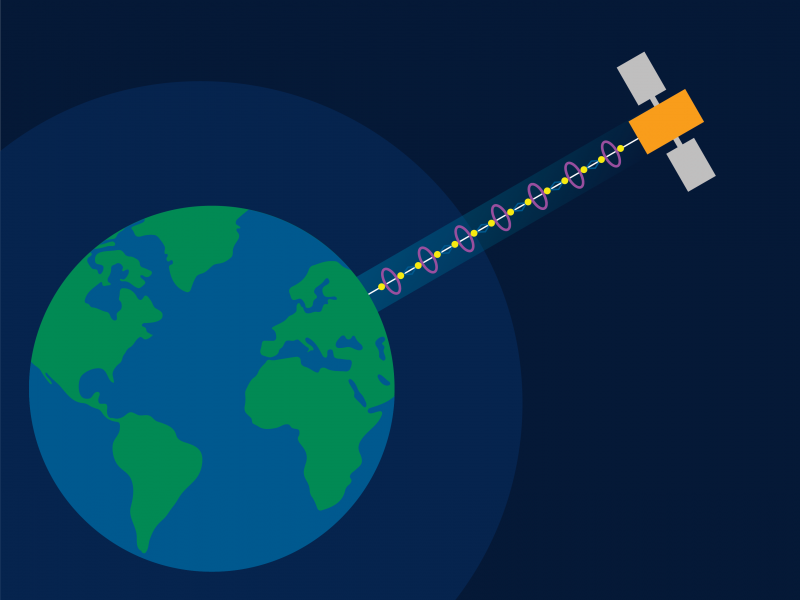 New research proposes to use the properties of light itself to create a path for through the atmosphere for light-transmitted data.

Newswise — TROY, N.Y. — Could light be used to transmit information between satellites and Earth? Atmospheric water vapor scatters and absorbs light energy, but overcome that obstacle, and light will carry far more information and move it faster than the radio waves we currently rely on. A new research project, supported by the National Geospatial-Intelligence Agency, proposes to use the properties of light itself to punch a pathway for data through the clouds.

“My work is understanding the constituents of light and manipulating them to interact with matter. In recent years, we’ve seen more advances in using light for biomedical imaging and quantum computing, but the fundamental properties of manipulating light are the same, and light can be made to do this work,” said Moussa N’Gom, an assistant professor of physics at Rensselaer Polytechnic Institute.

Using light to move data wirelessly, known as free space optical communication, is common in applications that need only travel a short distance, like infrared remote control units. But the reliability, quality, and stability of light-transmitted data plummets when used over any substantial distance within Earth’s atmosphere. Just as sunlight warms the clouds and refracts into a diffuse glow, data traveling as light is scattered and lost among the gases of the atmosphere.

In his lab, N’Gom manipulates the three main components of light — polarization, which controls the direction of the electric field of light; phase, which alters how light interacts with its environment; and the amplitude of light waves — to create specialized light with unusual capabilities. He may use light to image living tissue, cut hard materials with precision, or enhance optical communication.

To send data through the atmosphere, N’Gom uses a laser configured to generate a pulse of light so brief, intense, and uniform that it will create a tiny sphere of plasma — a super-heated gas created by the interaction between the pulse and the water vapor of clouds — in the air along the path of the light.

The plasma sphere continues to absorb energy from additional pulses, which in turn causes it to refocus and redirect oncoming pulses and generate an additional sphere of plasma along the path of the light. Then the cycle repeats.

This cascading effect, resulting from the repetitive interaction between the train of pulses and the plasma, can generate a laser filament as long as 100 meters. Along that filament, the plasma spheres produce an acoustic wave that disperses the water vapor around it. And in the clear tunnel that forms around the laser filament and its plasma envelope, N’Gom can deliver a second donut-shaped data stream of light that travels from space to Earth without degrading.

Each pulse lasts only on the order of a femtosecond, 10X-15 seconds, an incredibly short time during which light travels about 6 microns, or the width of a human hair.

“In this very, very short period of time, I can deliver a lot of energy very quickly, all at once,” N’Gom said. “And that breaks apart the atmosphere. It’s very brief, but it’s so strong and focalized at one point, and you’ll have a whole line of it, creating a hole through the clouds that we can use to send information.”

Although each pulse is composed of light in the visible spectrum — with wavelengths between 400 and 800 nanometers — and packs an enormous amount of energy for its duration, they are so short that the system will not be visible, nor pose a harm to life or the environment.

The project, “Free Space Optical Communication Through Dynamic Media” is supported with a three-year $600,000 grant.