Newswise — STARKVILLE, Miss.—When Mississippi State’s founding director of the Cobb Institute of Archaeology first saw the ancient site of Machaerus—the place in modern-day Jordan near the Dead Sea where John the Baptist was imprisoned and beheaded by Herod Antipas—he wanted to share its beauty and mystery with others. Some of the palace’s treasures uncovered by the archaeologist only now are being rediscovered with the help of passionate scholars and the late professor’s family.

Jerry Vardaman was the first to lead an excavation of the site in 1968 when he was affiliated with Southern Baptist Theological Seminary in Louisville, Kentucky, before joining Mississippi State in 1972 as a professor of religion and the Cobb Institute’s first director.

Vardaman’s excavation notes and artifacts from the historic, biblical location have been dormant since his 1993 retirement, spending decades in storage. James W. “Jimmy” Hardin, Cobb Institute interim director and associate professor in the university’s Department of Anthropology and Middle Eastern Cultures, found 13 boxes of these artifacts.

“Nobody realized that so much of Jerry’s Machaerus collection was here,” said Hardin, adding that the resources can provide additional scholarly insight about the ancient Jewish and Roman cultures which dwelled there.

Christopher A. Rollston, a George Washington University professor and one of the world’s leading experts on ancient Semitic languages and scripts, recently visited the Cobb Institute at Hardin’s request to see, firsthand, what has been uncovered at the land-grant institution. Also present were Alfalene Vardaman Morse, Vardaman’s 91-year-old widow, and Marylinda Govaars, an independent scholar from Burnet, Texas, who has pursued and pored over Vardaman’s collection at MSU and in Morse’s home, where she found 19 ostraca, fragments of ancient pottery with inscriptions in languages from long ago, among other artifacts.

An epigrapher, Rollston is taking temporary possession of the ostraca—which may be among Vardaman’s most significant findings—to analyze and translate them. He also is arranging high quality spectral photography of each piece, which he expects contain primarily personal names inscribed in the time period after John the Baptist’s death.

“Anytime you have inscriptions from a really important biblical site, they will provide information that is important to understanding the New Testament, the New Testament world and the world of Second Temple Judaism,” Rollston said, explaining that Machaerus is significant for both Judaism and Christianity.

He continued that the site of John the Baptist’s imprisonment and martyrdom is important for many reasons, as the historic figure represents “an intersection” of faiths and cultures.

“John the Baptist was a Jewish man who is connected with the origins of Christianity and featured prominently in the Quran, so he’s this bridge figure,” Rollston said.

Hardin explained that the site where John the Baptist was martyred was an isolated palace built by Herod the Great, father of subsequent leader Herod Antipas. Machaerus was among several such structures erected at strategic locations throughout the kingdom to provide border protection and refuge. It stood for less than a century before being destroyed by the Roman army. Archaeologist Győző Vörös has directed, in recent years, the site’s excavation in conjunction with the Jordanian Department of Antiquities, documenting it extensively in three volumes.

In addition to the ostraca, the Vardaman collection includes first-century artifacts from the period of the first Jewish revolt against the Romans, around A.D. 70, with items such as pottery, colored plaster, glass, marble, and ballista—large circular rocks used as weapons—among others.

“There are things that attest to the high-end nature of the site,” Hardin said. “These are items that you would associate with the best Roman cities of that time.”

Morse, who remarried 12 years ago after Vardaman died in 2000, marvels at the newfound interest in her late husband’s discoveries. Calling him a “multi-gifted person,” Morse explained that after Vardaman’s initial travel to Machaerus, he insisted on bringing her and their two daughters on subsequent trips to the site.

Hardin, whose own archaeological focus is on Old Testament times known as the Bronze and Iron Ages within the same geographical area, said it is not uncommon for artifacts to undergo a long process—even decades—from field excavation through laboratory analysis to the scholarly publication process. However, when Vardaman excavated Machaerus, it was before current methodologies and best practices were established, though he took copious notes. The work to pair his field notes and dairies with the corresponding artifacts to properly document his collection is “like an epic jigsaw puzzle,” Hardin said.

If not for the dedication of Govaars, he continued, some precious treasures easily could have been lost. Instead, Govaars has conducted years of research to relocate and reassemble the collection, relentless in her commitment to complete the publication process.

“The work that she’s putting into this is Herculean,” Hardin said of Govaars. “She has been very dutiful and serious about preserving things that are significant for a scholarly community.”

Together, Rollston and Govaars are planning to publish their findings from analysis of the Vardaman collection.

Govaars is a 63-year-old New Jersey native reared in Southern California who spent time as a civilian school teacher overseas for the Department of Defense Educational Activity. Her love of archaeology began when her uncle provided a scholarship for her to study in Israel in the 1980s. She later worked at the Caesarea Maritima site as a Drew University graduate student and came across Vardaman’s name in her research. She communicated with him through letters in 1981 but never met him in person. In returning to her research after a hiatus, she tried to contact Vardaman two decades later, just a few months after he died. In his absence, she continued her talks with his wife.

“I made a promise to Mrs. Vardaman that I would see that her husband’s work was published because he could no longer do it. Since she gave me access to unknown archives, it became my responsibility to publish them for other people,” said Govaars, adding that through her work, she wants to ensure that Vardaman’s memory is respected.

“I got bitten by the bug of archaeology, but it’s also the bug of being part of a team, and that’s why I love coming to the Cobb. It’s a team that’s supporting me,” she said.

Hardin said the Cobb Institute, and endowments given by Cully Alton and Lois Dowdle Cobb, position MSU to play a leading role in archaeological discovery. In addition to providing funding for the Cobb’s building, including a research facility, laboratory and museum, the Cobb endowments created an MSU research unit focused on archaeological specialties in the geographical regions of the Mediterranean basin and the southeastern United States. 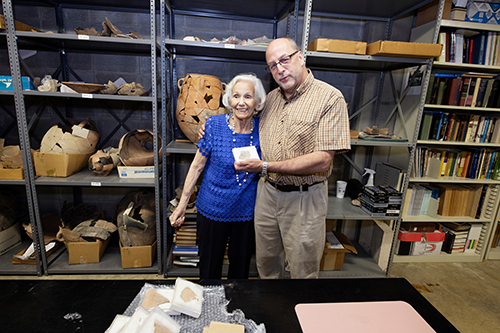 Caption: Alfalene Vardaman Morse, whose late husband E. Jerry Vardaman was the first to excavate Machaerus in 1968, recently met Christopher Rollston, a George Washington University professor and one of the world’s leading experts on ancient Semitic languages and scripts, so that Rollston could take temporary possession of 19 ostraca to study the ancient pottery fragments and translate their inscriptions. Morse and Rollston met at MSU’s Cobb Institute of Archaeology, where Jerry Vardaman became founding director in 1972. 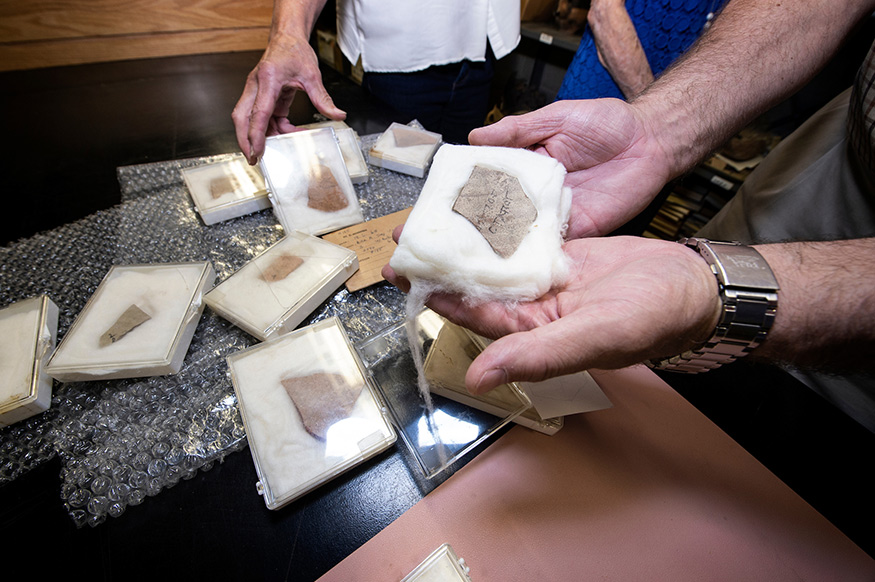 Caption: Christopher Rollston, an epigrapher and George Washington University professor who is one of the world’s leading experts on ancient Semitic languages and scripts, holds one of 19 ostraca, some of the most significant Machaerus artifacts from the E. Jerry Vardaman collection. Vardaman was the founding director of Mississippi State’s Cobb Institute of Archaeology. In addition to analyzing and translating the ostraca, Rollston is arranging high quality spectral photography of each piece. 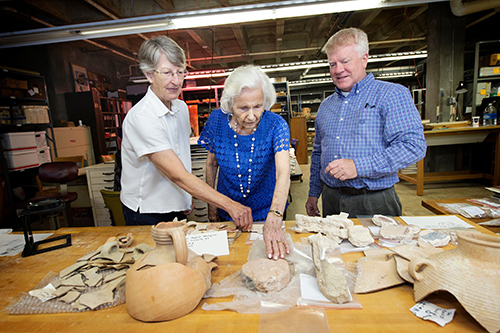 Caption: From left, independent scholar and visiting researcher Marylinda Govaars, looks over artifacts from the E. Jerry Vardaman collection from Machaerus—an ancient site where John the Baptist was martyred—along with Alfalene Vardaman Morse, the late professor’s wife who accompanied him to the site, and James W. “Jimmy” Hardin, associate professor and interim director of MSU’s Cobb Institute of Archaeology.