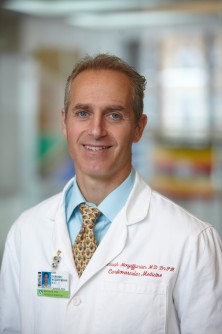 Dariush Mozaffarian, M.D., Dr.P.H., has been named dean of the Gerald J. and Dorothy R. Friedman School of Nutrition Science and Policy

Newswise — BOSTON (May 13, 2014) – Tufts University announced today that Dariush Mozaffarian, M.D., Dr.P.H., has been named dean of the Gerald J. and Dorothy R. Friedman School of Nutrition Science and Policy effective July 1. Mozaffarian joins the Friedman School from Harvard University, where he currently serves as associate professor and co-director of the Program in Cardiovascular Epidemiology at the Harvard School of Public Health (HSPH) and an associate professor in the Division of Cardiovascular Medicine at Harvard Medical School and Brigham and Women’s Hospital.

In announcing the appointment, Tufts University Provost and Senior Vice President David Harris described Mozaffarian as a perfect fit for Tufts. “His work is a blend of nutrition science and policy in the U.S. and internationally. His research expertise, professional and personal experiences and perspectives make him uniquely qualified to lead the Friedman School and to be a university-wide leader in the area of nutrition,” he said.

A cardiologist and epidemiologist whose research has illuminated the connections between lifestyle and heart disease and informed nutrition policy internationally, Mozaffarian said he is excited to lead a school that recognizes nutrition as a top global priority for the next 20 years in light of its impact on health, disability and environmental costs: “This is nutrition’s time, and the Friedman School in combination with all of Tufts’ nutrition efforts—such as at the USDA Human Nutrition Research Center on Aging (HNRCA), the medical school, the dental school and Cummings School of Veterinary Medicine—make Tufts a powerful place to study not only nutrition but policy.”

Mozaffarian has written or co-written more than 200 scientific publications on the diet and lifestyle factors that contribute to both heart disease and stroke, which are the leading causes of death worldwide, as well as diabetes and cognitive decline. Throughout his career, Mozaffarian has used scientific evidence to inform nutrition policy, noting that providing basic nutrition advice to people and relying on personal responsibility has not been enough to improve public health. More recently, he has been collecting robust, quantitative evidence on the effectiveness and cost-effectiveness of various nutrition policy approaches.

William A. Masters, professor and chair of the Department of Food and Nutrition Policy at the Friedman School and a member of the deanship search committee, says Mozaffarian will be a strong leader for the school. “He has a clear vision for the Friedman School, for nutrition at Tufts, and for how our research, education and outreach efforts can nourish the world,” he says. “His ambitions match our own. I am delighted to see him at Tufts—our students, faculty, staff and partners around the world will benefit hugely from his leadership, as we enter the next phase of the Friedman School’s growth and development.”

After graduating from Stanford University and Columbia University College of Physicians and Surgeons, Mozaffarian pursued clinical training in internal medicine at Stanford and then cardiology at the University of Washington, from which he also received a master’s of public health. He went on to earn a Doctor of Public Health from the Harvard School of Public Health and then joined the faculty, eventually co-founding the school’s Program in Cardiovascular Epidemiology. From 2004 to 2007, he was an adjunct faculty member in what is now the Department of Public Health and Community Medicine at Tufts University School of Medicine.

Mozaffarian is a fellow of both the American College of Cardiology and the American Heart Association and has served in leadership and advisory roles for other influential groups, including the World Health Organization and United Nations.

Tufts University, located on three Massachusetts campuses in Boston, Medford/Somerville, and Grafton, and in Talloires, France, is recognized among the premier research universities in the United States. Tufts enjoys a global reputation for academic excellence and for the preparation of students as leaders in a wide range of professions. A growing number of innovative teaching and research initiatives span all Tufts campuses, and collaboration among the faculty and students in the undergraduate, graduate and professional programs across the university's schools is widely encouraged.