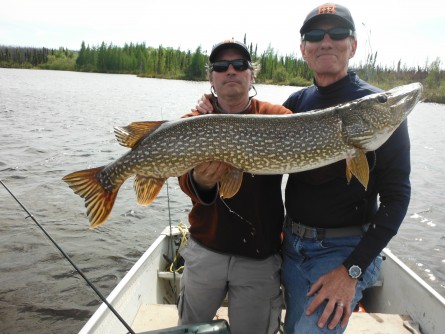 Abt caught 182 fish in four days at a remote lodge in Upper Sashkastian. And he didn’t need to take a single pain pill.

Abt was diagnosed with an abnormal blood vessel connection called an arteriovenous fistula, which was in danger of rupturing and causing a potentially catastrophic stroke.The less-invasive technique Ashley performed is called an endovascular treatment. He inserted a catheter (thin tube) in an artery in the groin, then guided the catheter up past the heart and through the carotid artery into the brain. Once the catheter reached the fistula, Ashley injected a liquid polymer that immediately solidified. This effectively sealed off the fistula to prevent a possible rupture.

“When I tell people about the procedure, it almost sounds like science fiction,” Abt said. “And I can’t say enough about Dr. Ashley. He’s just brilliant.”

The case began when Abt consulted a physician about tinnitus (chronic ringing in his ear). The physician ordered a scan, which detected the arteriovenous fistula.

Normally, arteries and veins are separate, with arteries transporting high-pressure blood from the heart to the body’s organs, and veins carrying low-pressure blood back to the heart. But in Abt’s case, an artery in his brain was directly connected to a vein. Consequently, high-pressure blood was shooting into the vein -- like a fire hose connected to a garden hose. The thin-walled vein, not designed to withstand such pressure, ballooned outward and was at risk of rupturing. Blood leaking from such a rupture could have caused a debilitating or fatal stroke.

“It was an extremely dangerous and complicated problem,” Ashley said.

Abt, 67, lives near Racine, Wis. in the village of Wind Point. He initially consulted with a neurosurgeon in Milwaukee, who had recommended open surgical resection as the only viable option.

Abt came to Loyola for a second opinion and met with Christopher Loftus, MD, chair of the Department of Neurological Surgery. Loftus is internationally known for his expertise in treating cerebrovascular disease. In a lengthy office visit, Loftus counseled and educated Abt about his condition.

Loftus presented the case to a multidisciplinary cerebrovascular conference. Loftus led the discussion as physicians carefully examined the risks and benefits of all options, including traditional open surgery, the less-invasive endovascular treatment or no treatment at all. Loftus decided to bring Ashley in on the case.

Open surgery would have involved a craniotomy, in which a surgeon removes a section of the skull to gain access to the brain. This would have required a minimum of five days in the hospital and weeks to recover at home.

Abt underwent the less-invasive endovascular treatment on a Friday. He went home the next day, and began working from home the following week. The second week, he returned to work as senior vice president for administration and business at Carthage College in Kenosha, Wi.

Then he went fishing.

“The care I received from the doctors, nurses and everyone else on the neurological staff was just incredible,” Abt said.

Ashley is among a new generation of neurosurgeons who are using less-invasive endovascular techniques to repair fistulas, aneurysms and other vascular problems in the brain. He also is trained in open brain surgery. With his dual training, Ashley can offer patients the safest and most effective treatment options for complex neurovascular disease. Many of his patients are referred to Loyola from other centers.