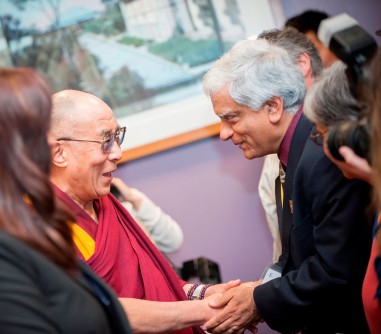 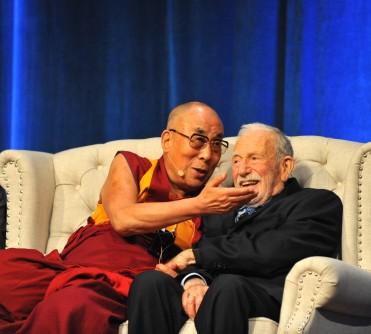 Credit: Photo provided by the Friends of the Dalai Lama Foundation

His Holiness and UC San Diego pioneering researcher Walter Munk share a moment of compassion and friendship in 2015. 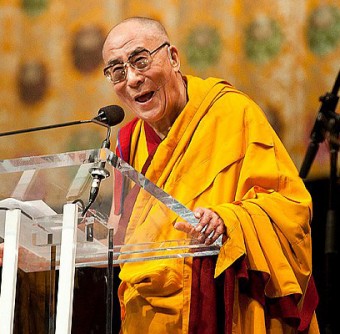 Credit: Photo provided by the Friends of the Dalai Lama Foundation

The Dalai Lama will share a public address on campus June 16, and a keynote speech June 17 at the UC San Diego All Campus Commencement.

Newswise — During his June 2017 visit to the University of California San Diego, His Holiness the 14th Dalai Lama will share messages of global compassion, with an emphasis on education, scientific inquiry and global responsibility––all values that deeply align with UC San Diego’s academic mission.

“These are the ideals we aim to instill in our UC San Diego faculty, staff and students,” said Chancellor Pradeep K. Khosla. His Holiness will share a public address on campus June 16, and a keynote speech June 17 at the UC San Diego All Campus Commencement.

His Holiness has dedicated his life to offering contemplative dialogues on the subject matters of science and Buddhism, education and secular ethics, kindness, compassion and universal responsibility, as well as principles in the fields of environmental sustainability, global warming and leadership. These areas of interest have led to connections between the Dalai Lama and valued faculty members at UC San Diego, including Suresh Subramani, distinguished professor of molecular biology and former executive vice chancellor of Academic Affairs; Veerabhadran Ramanathan and Walter Munk from Scripps Institution of Oceanography; and Lera Boroditsky in cognitive science.

Coming back to UC San Diego

Since His Holiness first visited UC San Diego in 2012 for the “Compassion Without Borders” symposium, there has been a great interest in bringing him back to campus, according to Suresh Subramani, who played a key role in the events and personally visited His Holiness in September 2016. “We feel greatly blessed to know His Holiness and admire his mission of spreading compassion and understanding around the world,” said Subramani, who serves as UC San Diego’s global director of the Tata Institute for Genetics and Society. “He told us he is half scientist and half monk!”

In Oct. 2016, Chancellor Khosla traveled to Dharamsala, India with Ven. Lama Tenzin Dhonden, the Personal Emissary for Peace to His Holiness and founder of The Friends of the Dalai Lama Foundation, to invite the Dalai Lama to speak at UC San Diego, which he accepted.

Recently, the campus established a partnership with The Friends of the Dalai Lama Foundation that includes summer study abroad opportunities in Dharamsala. This summer, UC San Diego students can participate in three global seminars with study topics that range from climate change and human rights to global health. The highlight of these programs will be a unique opportunity to meet with His Holiness the Dalai Lama, the spiritual leader of Tibetan Buddhism, in a daylong audience.

That 2012 symposium offered an opportunity for Veerabhadran Ramanathan, distinguished professor of Atmospheric and Climate Sciences at Scripps Institution of Oceanography, to participate in a panel discussion on climate science.

“It was certainly a memorable experience when I first met His Holiness in 2012 because we couldn’t have found a better title than ‘Compassion Without Borders’ for discussing climate change pollution, which travels across the globe,” Ramanathan said. “He was very keen on talking about science and how we can collaborate across borders and he asked about how we engage with scientists across the world.”

“I left that meeting with the impression that His Holiness is a moral leader for the world,” the climate scientist added. “I had the same gut feeling when I met Pope Francis in 2014. These are faith leaders who are amazing moral leaders who lead by setting an example for all of us.”

In 2015, pioneering oceanographer Walter Munk met the Dalai Lama at UC Irvine during the Global Compassion Summit. During a discussion on climate change, His Holiness paused to honor the renowned researcher from Scripps Institution of Oceanography.

Munk smiles when he speaks of his various meetings with his Holiness. “I have had the chance to spend several hours with him and he is very good company. He does not take himself too seriously and he has a great sense of humor.”

The Dalai Lama’s sense of humor also made an impression on Cognitive Science Professor Lera Boroditsky, who traveled to India in 2015 for an annual Mind & Life dialogue between His Holiness and leading scientists and philosophers before an audience of monks. There, she discussed her research in the fields of language and cognition.

“He is very quick to laugh, and that is a wonderful way of diffusing tension and inviting people to have perspective on a situation,” she said. “That is a wonderful personal quality that a lot of people could emulate.”

She added that she admires His Holiness' interest in science and research and how that has influenced his own teachings, as he was the first Dalai Lama to combine Buddhist science and Western Science.

Boroditsky is thrilled that the topic for His Holiness’s public address on June 16 at UC San Diego is “Embracing the Beauty of Diversity in Our World.”

“I know that His Holiness strongly emphasizes how all humans are deserving of love, compassion and respect. Celebrating diversity is a way to get beyond our individual myopia and learn something new, she said”

The title of the June 17 UC San Diego Commencement keynote address by His Holiness the 14th Dalai Lama is “The Value of Education, Ethics and Compassion for the Well-Being of Self and Others.”

At the University of California San Diego, we constantly push boundaries and challenge expectations. Established in 1960, UC San Diego has been shaped by exceptional scholars who aren’t afraid to take risks and redefine conventional wisdom. Today, as one of the top 15 research universities in the world, we are driving innovation and change to advance society, propel economic growth and make our world a better place. Learn more at www.ucsd.edu.