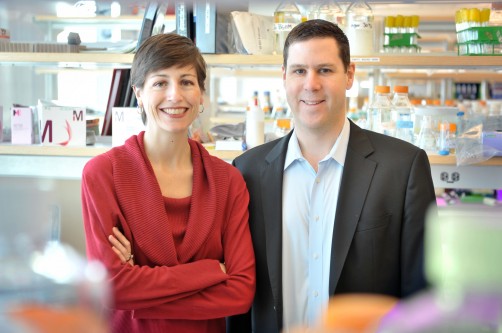 University of Chicago investigators Megan McNerney, MD, PhD, instructor of pathology, and Kevin White, PhD, professor of human genetics and director of the Institute for Genomics and Systems Biology.

Janet Rowley, MD, sparked a revolution in cancer genetics and continues to shape the field of personalized medicine today. Rowley, and her fellow University of Chicago colleagues, talk about this groundbreaking research and current advances in targeted therapy for cancer care.

Newswise — Researchers at the University of Chicago Medicine Comprehensive Cancer Center (UCCCC) have identified a gene that contributes to the development of acute myeloid leukemia (AML). This pivotal finding follows 40 years of University of Chicago research that has slowly unraveled the genetic basis of leukemia. In 1973, Janet Rowley, PhD, Blum-Riese Distinguished Service Professor of Medicine, Molecular Genetics and Cell Biology, and Human Genetics, was examining the DNA of leukemia cells and observed that one copy of chromosome 7 was missing. She deduced that one out of the more than 1,000 genes found on chromosome 7 could possibly be responsible for keeping the growth of leukemia cells in check. The search for a tumor suppressor gene continued among Dr. Rowley’s colleagues at the University of Chicago. In the 1990s, Michelle M. Le Beau, PhD, UCCCC director and the Arthur and Marian Edelstein Professor of Medicine, used a high-resolution technique called fluorescence in situ hybridization (FISH) to define the segment of chromosome 7 that was commonly deleted. She narrowed the region of interest to about 50 genes. Most recently, in 2009, Kevin White, PhD, professor of human genetics and director of the Institute for Genomics and Systems Biology (IGSB), and his research team harnessed advanced technology to further map the genes. Specifically, they used single nucleotide polymorphism (SNP) arrays to detect variations in the genes, as well as next-generation sequencing to analyze gene expression at high sensitivity. Because these techniques generate an overwhelming amount of information, Dr. White teamed with IGSB Director of Informatics Robert Grossman, PhD, to develop a large computing infrastructure that could meet the processing and storage demands of the biological data being generated. The analyses indicated that the CUX1 gene was the most significantly differentially expressed gene in cells that had lost chromosome 7. Interestingly, the researchers also identified a CUX1 fusion transcript, in other words, part of CUX1 fused to another gene. They hypothesized that this disruption in CUX1 may contribute to the growth of abnormal blood cells, a hallmark of AML. Next, the researchers tested the gene’s activity in the fruit fly. When they knocked out the CUX1 gene, some of the fruit flies developed leukemia. Collaborating with John Cunningham, MD, professor of pediatrics, the investigators carried out similar studies in mice and again observed that deficient levels of CUX1 contributed to abnormal growth of blood cells. They described their findings in an article published in the February 7 issue of Blood, the American Society of Hematology’s journal. The first author of the paper, Megan McNerney, MD, PhD, instructor of pathology and fellow in Dr. White’s laboratory, said, “This is a uniquely University of Chicago story, starting with findings from Janet Rowley and continuing over the years with an excellent group of clinicians and scientists using different technologies who worked collaboratively on myeloid leukemias.” She added that further studies that reveal how CUX1 regulates other genes will help find a potential pathway that can be targeted with drugs. This study was supported by the Cancer Research Foundation, the Leukemia & Lymphoma Society, the Chicago 1000 Cancer Genomes Project, and grants CA150631 and CA40046 from the National Cancer Institute of the National Institutes of Health.

This piece does not necessarily represent the views of the National Institutes of Health.