29-Apr-2015 9:05 AM EDT, by University of Florida Institute of Food and Agricultural Sciences
favorite_border 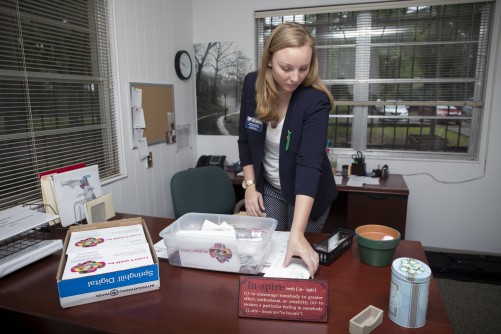 Jackie Nettles, a senior graduating this weekend from the University of Florida’s College of Agricultural and Life Sciences, works at her office at the Girl Scouts of Gateway Council, in Gainesville, Florida. Nettles will work full-time at the council office, starting a week after she receives her bachelor’s.

Newswise — GAINESVILLE, Fla. --- Jackie Nettles, who graduates this week from the University of Florida College of Agricultural and Life Sciences, is poised to work in a job she’s prepared for her whole life: community engagement manager for the Girl Scouts of Gateway Council.

Nettles grew up in Gainesville, volunteered as a soccer coach and as a youth leader at her church. She worked as a nanny and later interned at the ACORN clinic, a nonprofit medical and dental clinic in Brooker, Florida, where North Florida healthcare professionals volunteer to help rural residents.

“I did a lot of things with helping people,” said the Department of Family, Youth and Community Sciences (FYCS) senior. “The quote for FYCS is, ‘We’re not a beaker science; we’re a people science.’”

In her first CALS class, Nettles learned how to retain volunteers and keep them engaged, a skill she’ll find useful in her new role. Now Nettles will use her people science skills, and she’ll get paid.

Nettles already works part-time as community engagement manager for the Girl Scouts in Gainesville. A week after she graduates, she’ll begin full-time in the same capacity. And, you guessed it: Nettles was a Gainesville Girl Scout throughout her school years.

Several of Nettles’ relatives have also graduated from UF CALS. Two later worked as faculty members, including one as dean of the college.

About 750 students will earn bachelor’s degrees from CALS this spring; another 65 will earn master’s degrees, and 36 will earn their doctorates.

Nettles’ career choice mirrors that of many CALS graduates at UF and nationwide. They often apply their knowledge to a plethora of careers: marketing, management, engineering, and in Nettles’ case, nonprofit work.

According to an annual survey done by Iowa State University, the average entry-level starting salary for graduates in agronomy and crop sciences was $45,986 in 2013-14, the latest figures available. The high salary in that field was $100,000. Those who graduated in environmental sciences, fisheries, forestry and wildlife biology made an average $30,051 the same year, with a high salary of $65,000.

The data come from land-grant university career service offices from December 2013 to May 2014 and include only those getting bachelor’s degrees. UF usually participates in the survey.