UF/IFAS Battling a Disease Devastating to Deer Farms and Cows

In 2014, deer farmers in Florida were hit particularly hard by Hemorrhagic disease. These small, family-owned farms suffered at least $30 million in economic losses.

5-Aug-2015 10:05 AM EDT, by University of Florida Institute of Food and Agricultural Sciences
favorite_border 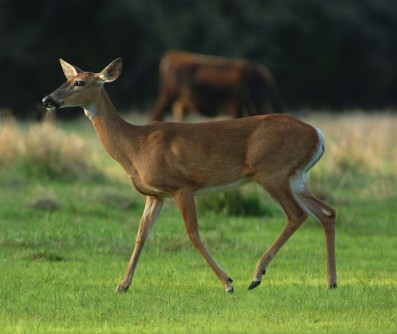 Newswise — GAINESVILLE, Fla. --- The Florida legislature recently allocated $2 million a year for the University of Florida’s Institute of Food and Agricultural Sciences to study Hemorrhagic disease, a virus which affects deer and can cross over into cattle, causing concern among Florida ranchers and prompting UF researchers to look for preventions and a cure.

“For deer farming to remain a viable industry, and to provide food security to the beef industry, Hemorrhagic disease must be controlled,” said Samantha Wisely, an associate professor with the UF/IFAS Department of Wildlife Ecology and Conservation. She is heading up UF/IFAS’ research. “Small, family-owned farms are disproportionately affected by Hemorrhagic Disease because they are not able to absorb many losses due to the small profit margin that characterizes their industry.”

Florida has nearly 400 deer farms and hunting preserves that breed deer and provide meat, plus hunting opportunities to residents and visiting hunters. More than 318,000 people got a deer-hunting license in Florida in 2014, generating $12.8 million in revenue, according to the Florida Fish and Wildlife Conservation Commission.

UF researchers say approximately 1,700 jobs have been created in rural counties throughout the state from this industry. But in 2014, deer farmers in Florida were hit particularly hard by Hemorrhagic disease. These small, family-owned farms suffered at least $30 million in economic losses.

Deer infected with the disease lose their appetite and their fear of people, grow weak, show excessive salivation, nasal discharge and bleeding from the skin. They can be seen breathing heavily and/or lying in bodies of water to reduce fevers, become unconscious, and have a blue tongue from the lack of oxygen in the blood. The head and neck of infected deer may swell. One of the most common characteristics of deer with the chronic form of Hemorrhagic disease is the sloughing or breaking of the hooves, which cause them to become lame.

It has similar effects on cattle – worrisome in a state with cattle and dairy industries that are two of the largest in the nation, maintaining more than 1 million head of cows combined, generating $1.4 billion in revenue and employing more than 25,000 people. The Cattlemen Association of America considers research into controlling Hemorrhagic disease a priority for state funding.

Wisely cautioned that the disease is not transmittable to humans and will not make people sick if they eat infected venison; however, all game meat should be cooked thoroughly before eating.

Hemorrhagic disease is transmitted by insects, most often a biting midge, also known as a no-see-um. Typically, outbreaks occur in late summer to early fall (August to October) and cease with the onset of frost, because of the die-off of the insects. Currently there are no vaccinations for the disease, but targeted spraying the right habitat with insecticides or larvacides could kill the midges and decrease transmission.

“One of our first tasks is to figure out specifically which biting midge transmits it so that we can begin to formulate an integrated pest management plan together,” Wisely said.

In 2014, Florida captive deer farmers and cattle ranchers partnered with researchers from UF/IFAS to better understand this disease and to find solutions for Florida’s livestock industry. UF and a network of deer farms throughout Florida are now working together to study the disease’s transmission and outcome in white-tailed deer. These farms are acting as sentinels for disease outbreaks so that deer and cattle ranchers can make informed decisions about habitat management and production strategies to curb the incidence of disease.

“We owe a debt of gratitude to Florida House Speaker Steve Crisafulli, Senate Majority Leader Bill Galvano, Governor Rick Scott, and the amazing people at UF/IFAS for leading the way to protect small farmers, grow our economy, and create jobs,” said Mark Owens, owner of Owens Farms, a 75-acre operation in Live Oak, Fla. “This will be cutting-edge research, saving our state tens of millions of dollars.”

Researchers are now implementing fact-finding so that they can begin to map hotspots of the disease and characterize the virus throughout Florida. It is a critical first step toward their ultimate goals of predicting and preventing the disease. They are also developing a training and residency program aimed at veterinarians, so that they gain experience on the particular needs of deer farms.