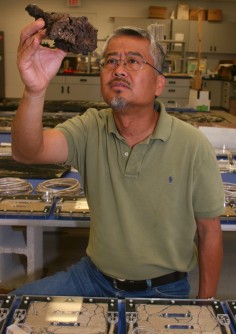 Nan-Yao Su is seen in his lab at the UF/IFAS Fort Lauderdale Research and Education Center. Su invented Sentricon, a termite-baiting system.

Newswise — GAINESVILLE, Fla. --- Nan-Yao Su, the University of Florida scientist who invented the Sentricon® system for termite colony elimination, has been selected for induction into the Florida Inventors Hall of Fame.

Sentricon®, the first commercial baiting product for subterranean termites, has protected millions of structures, including the White House and the Statue of Liberty.

The Hall of Fame selection committee chose nominees whose inventions and achievements have “advanced the quality of life for Floridians, our state and our nation,” according to a letter to Su from hall of fame Program Manager William Nikolic.

Su said he feels honored to be mentioned alongside such great inventors as Thomas Edison and UF’s own Robert Cade, who invented Gatorade®.

“I am glad that I can contribute to the quality of life of many homeowners in Florida and worldwide,” Su said.

Su, an entomology professor at the Fort Lauderdale Research and Education Center, part of UF’s Institute of Food and Agricultural Sciences, introduced Sentricon® in 1995. Su has worked as a faculty member for UF/IFAS since 1984.

The Sentricon® system has been marketed in 18 countries and protects more than 4 million homes. The technology has also been used by foreign governments in large-scale projects. In 2005, Su traveled to

Valparaiso, Chile, to take part in a government-funded project to fight termite infestations affecting about 15,000 homes. And from 2007 to 2011, he gave expert advice for a program to fight termites in China, reducing pesticide use by 240 metric tons.

“Until Dr. Su began his work, the solution was to saturate the ground around a house with highly toxic chemicals,” Payne wrote. “But Nan-Yao Su had a better idea. He focused on developing an insecticide that worked slowly so that termites could bring it back to their nest and infect their nest mates. And he focused on a less-intrusive delivery system that was less destructive and much more environmentally sustainable.”

For decades, the standard treatment for termites was to create a barrier around the foundation of a structure with potent chemicals that would kill any termite trying to crawl through it, said David Norton, UF vice president for research. This worked as long as the chemical retained its potency. But the pesticide didn’t kill termites in the nest, and it was environmentally unsustainable and expensive.

In 1995, Su was honored by the U.S. Department of Agriculture for his breakthrough technology, which was described as “the most important advance in termite control in more than 50 years.” In 2000, the Sentricon® system won the U.S. government’s Presidential Green Chemistry Challenge Award. Also, the bait used in the system was the first to be registered under the U.S. Environmental Protection Agency’s Reduced Risk Pesticide Initiative.

UF’s license with Dow AgroSciences has generated nearly $40 million in royalties over the years, which the university has reinvested in new research. Su has contributed much of his royalties to scholarships at UF and the University of Hawaii. He also established the Nan-Yao Su Award for Innovation and Creativity in Entomology for the Entomological Society of America.

“Dr. Su changed the paradigm of termite protection with a safer, more-effective approach that has helped countless homeowners and businesses and prevented thousands of tons of dangerous chemicals from entering the environment,” Norton said.

Su will be inducted at the second annual ceremony Oct. 2 in Tampa.