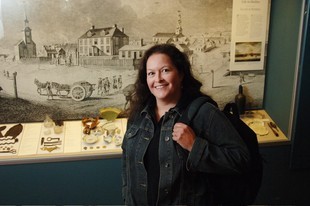 Newswise — Katie Cottreau-Robins wonders what it must have been like when their eyes met — when the newly freed black Loyalists and the black slaves of white Loyalists encountered each other on the same ship bound for Nova Scotia.

"There must have been an interaction between the freed and the enslaved — what would they have said to each other?" she asks. "Gosh, it must have been tough."

There's a lot to learn about slavery in post-revolutionary Nova Scotia. Ms. Cottreau-Robins, who has a Master of Environmental Design Studies from Dalhousie, is delving into the subject for her PhD, an interdisciplinary degree that combines social history, landscape studies, and archaeology. She's got a team of advisers to help her: history professor Jerry Bannister, architecture profs Christine Macy and Sarah Bonnemaison and the chair of Anthropology Department at Saint Mary's University, Steve Davis.

The history of slavery in Nova Scotia predates the founding of Halifax by Edward Cornwallis in 1749. Slavery was legal in the new world outpost and slaves were bought and sold like other property. The Nova Scotia Gazette and Weekly Chronicle carried advertisements for "a likely, well-made negro boy, about sixteen years old" and "an able Negro wench, about twenty-one years of age, capable of performing both town and country work."

After the American Revolution, Nova Scotia experienced an influx of American Loyalist refugees. Among these new immigrants were African-American Loyalists, many of whom had won their freedom fighting for the British. While some remained in Nova Scotia waiting for promised land grants, others left for Sierra Leone seeking a better life.

But for other blacks, there was no choice. They were the slaves brought north by wealthy white owners. One such prominent businessman, a Harvard-educated lawyer from Massachusetts, arrived with his children and slaves (four at least) to settle on a large tract of land in the Annapolis Valley in 1782. Ms. Cottreau-Robins has an inkling where his grand house, barn and apple orchard were once located — and the slave quarters, too.

"The historical records are scanty — you may get a mention of 'my slave,' a word or two here and there," she says. "But from archaeology, we can learn a lot because you can hold the physical evidence in your hand"¦ the dishes they ate from, the houses they lived in, the plants they grew. I can't wait to get out there and explore the historic landscape."

Ms. Cottreau-Robins, 44, discovered her passion for archaeology as an undergraduate student taking part in a field school at Thomas Jefferson's retreat in Virginia, where slave quarters were located beside the ornamental gardens. Later, while doing her master's degree, she led an archaeological project at the site of the former Seaview African United Baptist Church, the heart and soul of the bulldozed black community of Africville on the shores of Halifax Harbour.

"I grew up in Halifax, I've lived in Nova Scotia all my life and yet I didn't know about this history," she says. "That's what got me to unravel this thread of history. I think what intrigues me about black history is that there is just so much to learn."

One happy complication, though, is her new job. The PhD student and mother of three turned down a $40,000 research grant from the Social Sciences and Humanities Research Council and accepted a position as Nova Scotia's Curator of Archaeology a few months ago. But she adds her job and her research are complementary so she remains on track to complete her degree in about two more years.