Watch as the 2015 winner is announced.

Sophie's Legacy Why did a successful early 20th century New York writer and editor bequeath her estate to a historic college in Maryland she never attended? And how did that create the largest student writing prize in America? 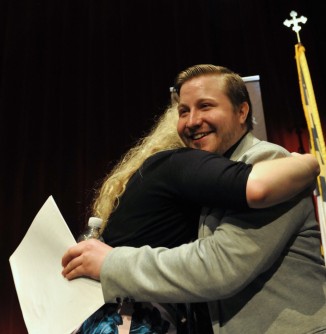 Winner Alex Vidiani gets a congratulatory hug from a friend.

Newswise — CHESTERTOWN, MD—A Washington College senior who spent four years honing his skills as a poet has won the largest student literary prize in the nation, the Sophie Kerr Prize, this year worth $62,900.

Alexander R. Vidiani, who grew up in the Hunt Valley suburbs north of Baltimore, was named the Sophie Kerr winner Friday evening, May 15, on the Washington College campus, at an event where he and five other finalists for the Prize read from their work. As specified by the will of benefactor Sophie Kerr at her death in 1965, each year the English Department faculty at the historic liberal arts school awards the Prize to the graduating senior who, in their judgment, shows the most literary talent and promise. This year the professors reviewed 25 writing portfolios submitted by Prize hopefuls before selecting six finalists and ultimately bestowing the cash prize on Vidiani. The other 2015 finalists for the Sophie Kerr Prize are Julia D. Armstrong, Valerie A. Dunn, Ariel J. Jicha, Paige Kube, and Sydney I. Sznajder.

Jehanne Dubrow, a poet who directs the Rose O’Neill Literary House at Washington College, says Vidiani’s talent was clear when he enrolled in her introductory creative writing course his freshman year. “He had an incredible ear for the music of poetry, he just needed to learn how to be disciplined about doing the work. Once we talked about how talented he was and where he could take that talent, he became one of our most dedicated students. He will revise a poem 100 times or more if needed. He’s the finest student poet I’ve had the pleasure to work with in my seven years here at the College.”

Vidiani’s prize portfolio is filled with poems about loss, masculinity, fatherhood and the way we use language to connect with one another. His subject matter was inspired in part by the work of poet and memoirist Nick Flynn, who came to Washington College to read and talk with students in March 2012. Vidiani, still a freshman, delved into Flynn’s work, including his debut poetry collection, Some Ether, which focused on family trauma and relationships. It inspired Vidiani to move on to weightier subjects in his own writing.

“Alex’s poems come out of the elegaic tradition, which seeks to transform mourning into memory and melancholy into monument,” says Washington College English professor James Hall, who was Vidiani’s advisor for his senior thesis (“Masculinity and Male Paternity in Contemporary American Poetry: Why Fathers Matter”). “He gives form to feeling, and transforms the particular into the universal. Alex has discovered that poetry offers liberating forces for difficult subjects.”

English Department chair Kathryn Moncrief adds that the jury found Vidiani’s portfolio to be “beautifully crafted and polished, and tightly edited. It felt like the beginning of a book manuscript. We could see the book this could become in a few years,” she says.

A graduate of Calvert Hall College High School in Towson, Vidiani majored in English with a minor in creative writing and served as poetry editor of the student-run literary magazine The Collegian while at Washington College. Last summer he interned with the poetry editor of Summerset Review, Meredith Davies Hadaway, and he was recently named a senior poetry reader for the national literary and arts journal Cherry Tree, published by the Rose O’Neill Literary House. Two of his poems will be published soon in respected online publications, Cleaver Magazine and the independent journal Juked. This fall, Vidiani plans to enter the MFA program in poetry at the University of Maryland, where he has been awarded a Teaching Assistantship.

About Sophie KerrA native of Denton, Maryland, Sophie Kerr was a successful fiction writer and magazine editor who spent most of her adult life in New York. At her death in 1965, she bequeathed much of her estate to Washington College with the stipulation that half its income would be awarded annually to the senior showing “the most ability and promise for future fulfillment in the field of literary endeavor.” The other half of the endowment brings a steady stream of notable writers, authors, and editors to campus for readings and workshops, provides scholarships for students who show literary promise, pays for library books, and supports various other literary activities. Visiting luminaries have included Edward Albee, Jonathan Franzen, Allen Ginsberg, Toni Morrison, Joyce Carol Oates, Colum McCann, Junot Díaz, and Natasha Trethewey.

Caption: Watch as the 2015 winner is announced.

Caption: Sophie's Legacy Why did a successful early 20th century New York writer and editor bequeath her estate to a historic college in Maryland she never attended? And how did that create the largest student writing prize in America?