Undergraduates Design and Build ‘Sandbox’ to Show How Gravity Works 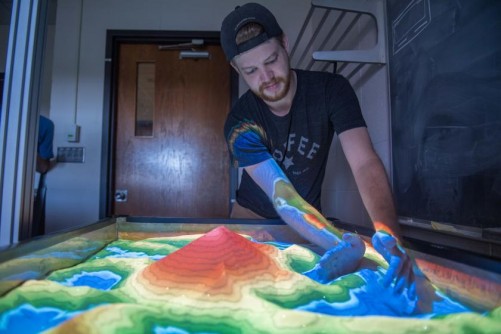 The University of Iowa has a new sandbox—and it’s used to explain gravity. Undergraduates in the Department of Physics and Astronomy designed and built an augmented-reality sandbox where users can design their own universe and then watch how gravity affects an object as it travels through the imagined environment.

Newswise — At the University of Iowa, you can see how gravity works by playing in the sand.

Undergraduate students in the Department of Physics and Astronomy designed and built a sandbox where users can mold their own universe with sand and watch how gravity affects an object—a spacecraft or a comet, for example—as it travels through the imagined environment.

Funded by a grant from the U.S. National Science Foundation (NSF), the augmented-reality sandbox, dubbed “Gravbox,” is the first interactive system of its kind to be used for astrophysics. Similar setups exist for geology and engineering—the Department of Earth and Environmental Sciences and the Lichtenberger Engineering Library have them—but the UI students advanced the concept to bring gravity, an invisible force not easily explained or understood, to life.

“I think it’s unbelievable,” says Hai Fu, assistant professor in physics and astronomy, who won the $405,011 award, part of a broader NSF application to fund his research into what happens when galaxies collide. “The students built the whole thing from scratch.”

Fu says the sandbox will be used to teach fundamental principles in physics, such as gravitational dynamics involved in the distribution of stars, the shapes and evolution of galaxies, and more.

He also plans to showcase the sandbox to amateur astronomy clubs, as an exhibit at museums, and in public outreach and demonstration shows for children, led by Dale Stille, instructional resource specialist in the department.

The group is making its software publicly available and is creating a website with a tutorial for building the system.

Fu introduced his idea in fall 2016 to the 10 sophomores, juniors, and seniors enrolled in his two-semester course, Introduction to Astrophysics. He intended the project to complement what the students learned in his lectures.

He showed them an outline of the concept on a blackboard on the first day of class.

“It seemed impossible,” recalls Sadie Moore, a senior physics and astronomy major from Burlington, Iowa. “The idea was awe-inspiring.”

Undeterred, the students split into three teams and got to work.

One team concentrated on designing and engineering a structure that could hold 200 pounds of sand. The students cut wood for the base in the department’s machine shop under the guidance of Head Machinist Brian Busch; assembled and mounted the projector stand; and constructed a slide-out cabinet to store the computer, tablet, and cables.

All work was done in-house, says Ross McCurdy, a member of the construction team who graduated from the UI in May 2017 and is a graduate student in the astronomy department at Penn State University.

“We went from an empty shell to a nice, safe enclosure,” he says.

A second team focused on devising an algorithm to compute the gravity exerted on the object as it “travels” in the sandbox. To accomplish this, the students developed software to calculate and calibrate the object’s orbit to changes made in the sandbox environment. The team reduced from 3 minutes to less than 1 second the time for the object to respond to a user command.

“There’s that moment of recognition that what you’ve been working on has actually paid off in a finished product,” says Sophie Deam, a senior physics and astronomy major from Ames, Iowa, and member of the gravity algorithm team.

The third team was charged with creating an interface for Gravbox. After first devising an Android app, the group decided to conceive its own instructional display. On a touchpad mounted to the sandbox, users choose the object they want to travel in their universe, draw an arrow to start the object’s journey, and then watch on an overhead monitor and in the sandbox how the landscape they create in the sand—the imaginary space environment—alters the object’s orbit.

“It’s tap and go,” says Erin Maier, a physics and astronomy major from Hudson, Ohio, who graduated in May 2017 and is enrolled in the Graduate Program in Astronomy at the University of Arizona.

“Now, shapes you normally don’t see in nature you can simulate in the sandbox,” adds Zachary Luppen, a junior physics and astronomy major from Fort Dodge, Iowa.

The students labored over the project throughout the 2016–17 academic year. But they realized that there were still some glitches in the Gravbox’s operation. So, a handful stuck around during the summer to continue tinkering; the collaboration lasted through the fall, but no one seemed to mind.

“It was engaging that in a sense you had to work as a team,” says Mason Reed, a senior physics and astronomy major from Independence, Iowa. “That gives you perspective for what working in a research group would be, figuring out how to work together, and finding the right balances.”

The biggest challenge, several students say, was making sure the sandbox was useful and interesting for both children and adults.

What people of all ages will learn, the students hope, is basically the same.

“We hope we’re bringing the cosmos to life,” Moore says.