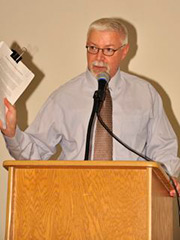 Why would Rev. Billy Graham choose to be buried in a casket made by inmates at America's largest prison? Because, despite ministering to U.S. presidents and the Queen of England, prison ministry was at the heart of Graham's message. Dr. Michael Hallett, criminology professor at the University of North Florida, led a three-year study at Angola, America's largest maximum-security prison, exploring the religious lives of long-term inmates. The study resulted in his book, "The Angola Prison Seminary: Effects of Faith-based Ministry on Identify Transformation, Desistance and Rehabilitation,” which explores the unique effect on religion at Angola prison, of which the Rev. Billy Graham was a key part. Angola is the only prison in America that allows inmates to run their own churches, two of which were built and paid for in part by Graham.

Hallet is available to discuss the following:

Hallett is a professor of criminology and criminal justice at the University of North Florida in Jacksonville and earned his doctorate from Arizona State University. He currently serves as a Senior Research Fellow at Baylor University's Institute for Studies of Religionn

His bio can be found at https://www.unf.edu/coas/ccj/faculty/hallett.aspx.