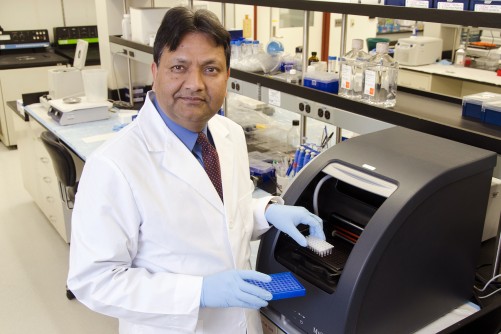 Newswise — Funded by a five-year, $7 million federal grant, the University of Illinois at Chicago College of Medicine will create a new center, the first of its kind, to study the effect of long-term alcohol exposure on genes.

The National Institute on Alcohol Abuse and Alcoholism, one of the National Institutes of Health, awarded the funding to establish a Center for Alcohol Research in Epigenetics (CARE). Subhash Pandey, UIC professor of psychiatry, will direct the center.

"Epigenetics" refers to chemical changes to DNA, RNA, or specific proteins, that change the activity of genes without changing the genes themselves. Epigenetic changes can occur in response to environmental or even social factors, such as alcohol and stress -- and these changes have been linked to changes in behavior and disease.

Epigenetics plays a role in the development and persistence of neurological changes associated with alcoholism, says Pandey, who is director of neuroscience alcoholism research at UIC and research career scientist at the Jesse Brown VA Medical Center.

The CARE researchers will investigate how alcohol-related epigenetic changes influence gene expression and "synaptic remodeling" -- the networking of nerve cells to each other. They will also look closely at how these changes correlate with behavior, such as anxiety and depression, and whether epigenetics may play a role in the withdrawal symptoms that make abstinence difficult.

“This award will allow the College of Medicine to build on Professor Pandey’s exemplary research on chronic alcohol use and alcoholism in addition to bolstering our leadership in understanding the causes of alcoholism as well as finding new ways to treat this devastating disease,” said Dr. Dimitri Azar, dean of the University of Illinois College of Medicine.

In a recent study using an animal model, Pandey and colleagues at UIC found that epigenetic changes resulting from exposure to alcohol during adolescence were associated with abnormal brain development and anxiety and alcohol preference in adulthood. In earlier work, the researchers were able to show that reshaping of the DNA scaffolding that supports and controls the expression of genes in the brain may play a major role in alcohol withdrawal symptoms, particularly anxiety.

Several brain regions play a crucial role in regulating both the positive and negative emotional states associated with alcohol addiction. Pandey said the center will look at the circuitry involved in reward and pleasure, depression, cognition, and anxiety.

CARE researchers will study disease using preclinical animal models and post-mortem examination of human brain. Investigators will also do neuroimaging of patients diagnosed with alcohol abuse and dependence and search for "biomarkers" of alcoholism -- measurable indicators in blood that correlate with alcohol addiction.

There are two causes of dependence on alcohol, said Pandey -- people may drink to get pleasure, or to self-medicate to relieve depression or anxiety. But alcohol addiction may itself cause depression and anxiety, feeding into a cycle.

“Ultimately, we hope these studies may lead to the identification of molecular cellular targets and gene networks which can be used to develop new pharmacotherapies to treat or prevent alcoholism,” Pandey said.

UIC's CARE is the only NIH-funded alcohol research center in Illinois, said Dr. Anand Kumar, Lizzie Gilman Professor and head of psychiatry, and is "well positioned to perform state-of-the-art basic translational and clinical research in alcoholism.”

In addition to its research projects, CARE will provide resources for training and community outreach. Based in the UIC psychiatry department, it includes collaborators from biophysics and physiology, anesthesiology, the Jesse Brown VA Medical Center, and the University of Illinois Urbana-Champaign campus.