University of Alabama Researchers Look to Butterflies to Improve Flight 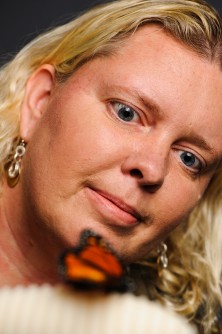 Dr. Amy Lang is studying the aerodynamic properties of the scales that line butterfly wings.

Newswise — A better understanding of the aerodynamic properties of butterfly wings may lead to improved human-made flight, according to research at The University of Alabama recently funded by the National Science Foundation.

Dr. Amy Lang, associate professor of aerospace engineering and mechanics, was awarded approximately $280,000 by NSF to study the tiny scales on butterfly wings that help lift the insect despite its low speed during flight. Lang, who also works with shark scales, uses bio-inspired engineering to help improve the movement of flow over wings, for instance, specifically by altering the boundary where the air interacts with the moving surface, such as a butterfly wing.

“The butterfly scales are beautifully arranged on the wing, and how the scales are arranged is where the aerodynamic benefit comes in,” Lang said.

The scales covering butterfly and moth wings represent about 190 million years of natural selection for insect flight efficiency, with the Monarch butterfly estimated to have appeared as recently as 250,000 years ago. Evolutionary adaptations in the structure of the scales appear to have led to a unique micro-pattern that reduces drag and likely increases thrust and lift during flapping and glided flight.

One scale on a butterfly wing is as small as a tenth of a millimeter. Arranged like shingles on a roof, the scales stick up slightly, trapping a ball of air under the scale and allowing air to flow smoothly over it, Lang said.

Despite myth, butterflies can fly without the scales, but initial testing showed it requires more flapping for the insect to remain in the air. As part of the research, Monarch butterflies with scales and those with scales brushed off flew in an autonomous tracking facility at The University of Alabama in Huntsville directed by Dr. Nathan Slegers, associate professor mechanical and aerospace engineering.

The lab used high-speed video of a Monarch in flight to show that the same butterfly without its scales flapped its wings about 10 percent more to maintain the same flight.

“This reduced energy expended during flight would be important to the Monarch which has the longest migration of any insect,” Lang said.

Lang and her student will study clipped wings and models of butterfly-inspired geometries about 10 to 100 times larger than real scales. Experiments in the lab will test how butterfly wings improve airflow.

“If we understand the butterfly wing, there could be other applications,” Lang said.

Modeled scales could improve airflow in micro area vehicles, or MAVs, miniature, unmanned, aerial robots primarily used for military reconnaissance and surveillance purposes. With bio-inspired geometries on its wings, MAVs could carry a larger payload or use less fuel. Lang speculated that in the future solar cells could be modeled after butterfly scales on wings that could provide energy and improve flight.

For now, though, Lang hopes to fundamentally understand the advantages a butterfly gets from the scales on its wings.

“Innovations in the field of boundary layer control are needed to provide efficient methodologies to decrease drag and improve efficiency,” she said.