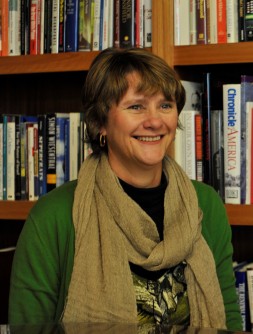 Anna C. Faul, D.Litt., has been named executive director of the Institute for Sustainable Health and Optimal Aging at the University of Louisville. The institute was created in September 2014 to examine the needs of the growing population over age 65.

Newswise — LOUISVILLE, Ky. – The associate dean of the University of Louisville Kent School of Social Work has been named executive director of the Institute for Sustainable Health and Optimal Aging at UofL.

Anna C. Faul, D.Litt., was named executive director by the UofL Board of Trustees at their meeting on Feb. 5. Her appointment became effective Feb. 10.

The Institute for Sustainable Health and Optimal Aging (ISHOA) was established by the Board in September 2014 to examine the needs of the growing population over age 65. The institute is interdisciplinary, including faculty, staff and students from nearly every school and college comprising the University of Louisville, including arts and sciences, dentistry, engineering, law, medicine, nursing, public health and social work.

“Through this institute, the University of Louisville will grow the knowledge base related to the aging process, not just biologically, but also in terms of function, environment, culture and socio-economic aspects,” said David L. Dunn, M.D., Ph.D., executive vice president for health affairs at UofL. “The need for multi-disciplinary approaches to examine issues that our aging population faces is significant because no issue stands on its own; all are inter-related from a health, social science, legal and policy perspective. Dr. Faul has the background and insight to lead this effort.”

“I am excited about the opportunity to lead the Institute for Sustainable Health and Optimal Aging and believe it will become a transformative national leader in improving the aging experience,” Faul said.

“Our goal is to change current environments into livable aging communities where the science of aging is understood and where adults who are aging can lead quality lives. As a transdisciplinary scientist I believe that this Institute is poised to create synergy in the currently fragmented system of aging initiatives.”

About Anna FaulFaul is a tenured full professor who came to UofL in 2000 as assistant professor of social work. She became associate dean of academic affairs at the Kent School of Social Work in 2003. She also is a Hartford Faculty Scholar of the Gerontological Social Work Initiative, a national effort of the John A. Hartford Foundation to address gaps in social work education and research around the health and well-being of older adults. Faul has held a joint appointment as research associate and distinguished professor in the Department of Social Work of the University of the Free State, Bloemfontein, South Africa, since 2012.

• The high prevalence and disproportionate impact of chronic health conditions on marginalized people in society• The lack of health self-management and prevention programs that address cultural and complex community influences on people’s health• The need for sophisticated effective health behavior and health care utilization• The need for trans-disciplinary researchers and practitioners to help fill the workforce gap for an aging society• The need for reforming long-term care and the promotion of “aging in place,” the concept of living out later years in the home with sufficient care provided rather than in a retirement home or health care facility

Faul serves as co-chair of the Educational Outcomes Assessment Track of the Council on Social Work Education, the national accrediting agency of social work education. She also serves on the CSWE Council on the Role and Status of Women in Social Work Education. At UofL, she serves on the Delphi Center Advisory Board, Graduate Deans Advisory Council, Provost Budget Task Force and Academic Program Review Committee, among others.