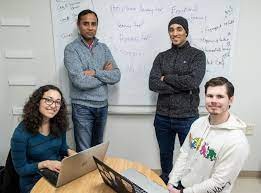 Krishna Venkatasubramanian, an assistant professor of computer science at the University of Rhode Island, is looking for a way to help through technology. Venkatasubramanian has teamed with the Massachusetts Disabled Persons Protection Commission to develop an app-based tool to help people with intellectual and developmental disabilities better report sexual abuse. His work is funded by a three-year, $380,510 contract with the Commonwealth of Massachusetts, part of a grant from the federal Administration for Community Living in the U.S. Health and Human Services Department.

“It’s a terrible problem. Abuse is rampant in the community, and there are a lot of obstacles to reporting abuse,” says Venkatasubramanian. “Our goal is to build a tool that makes reporting easier, but also teaches folks how to recognize abuse and what they should do.”

“Violence against people with disabilities is a frequently unrecognized and under-reported problem that has reached epidemic proportions,” says Nancy A. Alterio, executive director of the Massachusetts commission. “People with intellectual or developmental disabilities face significantly higher rates of abuse than the general population. Forty-nine percent experience 10 or more incidents, and shockingly, only 3 % of sexual abuse cases involving people with IDD will ever be reported.”

The app, which is scheduled to be available in 2021, will provide interactive information to help people with intellectual and developmental disabilities identify abuse, easily file a report, and take the appropriate steps in its aftermath to stay safe. In designing the app, Venkatasubramanian is collaborating with the Massachusetts commission, the Department of Developmental Services, and Massachusetts Advocates Standing Strong, a statewide self-advocacy organization run for and by people with IDD, along with the input of clinicians, caregivers, experts and the future users of the app.

Deb Lloyd, project coordinator with Standing Strong, says there is a great need for the app. People with IDD are at heightened risk of being abused, she says, and many times abusers are people they know, adding difficulties to reporting abuse. At the same time, many in the population lack an understanding of what constitutes abuse.

“This is an amazing project,” Lloyd says. “Learning about abuse will be very helpful. Individuals will be able to access the information repeatedly and have a better understanding of the material. They also will be able to report independently. Fear of caregiver interference will hopefully be eliminated. The current reporting system is in writing or by phone and most cannot report without support or telling someone who will report on their behalf without judgment.”

Venkatasubramanian, whose research focuses on cybersecurity, personal safety and well-being, and accessibility with an aim to explore the frontiers of research in computer science to build usable technologies for marginalized populations, began work on the app in 2018 while teaching at Worcester Polytechnic Institute. When he heard the NPR report, he contacted local advocacy groups in Massachusetts and the commission to see how he could help.

In developing the app, Venkatasubramanian, along with psychologist Jeanine Skorinko, a professor of psychology at Worcester Polytechnic Institute, has been working with advocacy groups and talking with people with IDD to understand how they use technology and learn about their daily lives. He learned most were comfortable with technology and most used tablet-based apps. As the app is developed, prototypes will be tested by its intended users to determine what designs are most effective.

“There are a whole bunch of design guidelines that typically are followed when the audience has IDD,” he says. “You have to make sure you don’t have upsetting colors or you’re not giving negative feedback. Some users also may have other conditions. They may have vision impairment. They may have motor disabilities.”

“Our goal is to co-design with people with IDD, not just make them a recipient of the great things we build,” he adds. “We don’t believe we can build for a population unless they’re involved.”

Tom Howard, a URI graduate student in computer science, is helping to oversee the project, working with fellow graduate students Emiton Alves and Mary Wishart. Howard and Alves have been working on story-board-like prototypes of abuse-awareness information, researching how to make it more engaging for users. “This project resonates really deeply with me,” says Howard, of Smithfield, Rhode Island. “I come from a family that’s done foster care my whole life. So, when I heard about a project that would give me an opportunity to potentially help so many people, it all just fell into place for me.”

Much of the foundational information needed to design the recognition and response functions is already available, including using instruction from a commission workshop tailored to educate people about abuse and how to protect themselves. For the reporting tool, Venkatasubramanian and Skorinko will survey clinicians and caregivers to understand the factors around abuse and how they might affect a victim’s ability to report abuse.

“We have to understand the abuser’s mindset, the victim’s mindset, their lifestyle, the circumstances around the abuse,” he says. “We want to build an app that allows victims to report abuse as safely as possible.”

When completed, the app’s reporting function will assist individuals in reporting abuse to the Massachusetts Disabled Persons Protection Commission through its 24/7 hotline or the internet, Alterio says.

“The hotline number could be preloaded into the app so a user would not need to find the number,” says Alterio. “The app will also work with our soon-to-be new web abuse reporting portal. Individual pre-loaded information, such as name and contact information, could auto-fill the abuse reporting form and make it easier to use the portal. Once the report comes in, the cases will proceed through the commission’s usual screening, referral, and/or investigation processes.”

While the app is being designed to be used through the Massachusetts commission, Venkatasubramanian says its recognition and response functions will be universal and its reporting capability could be adapted for use in other states.