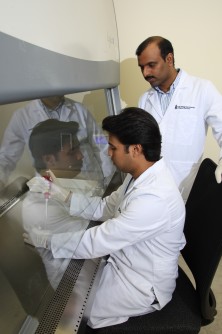 South Dakota State University associate pharmacy professor Hemachand Tummala, right, works in the lab with a doctoral student. He and professor Xiangming Guan are embarking on a new project to improve the therapeutic outcomes in cancer patients.

Newswise — Boosting anti-cancer immunity through diet and novel drug therapies—that’s the idea behind a collaborative project involving researchers from the South Dakota State University College of Pharmacy and Sanford Research in Sioux Falls.

Associate professor Hemachand Tummala and professor Xiangming Guan are partnering with cancer surgeon and researcher John Lee and biochemistry researcher Keith Miskimins on a $90,000, one-year study to improve the therapeutic outcomes in cancer patients through a combination of a specially designed diet formula with novel drugs. A grant from SDSU and Sanford Health funds the research.

"One’s immune system plays a critical role in detecting and eliminating abnormal cells, like cancer cells, to keep us healthy,” Tummala explained. In addition, it is also important during chemotherapy and radiation therapy in cancer patients. However, there are two caveats in traditional approaches.

Scientists already know tumor cells require high levels of glucose for energy and nutrients as they multiply rapidly. The byproduct of this activity is high levels of lactic acid, which is detrimental to anti-cancer immune responses needed during chemotherapy/ radiation therapy, Tummala explained in his project summary.

“The other caveat is that cisplatin, the most commonly used chemotherapeutic drug in the world, attacks tumors, but also destroys white blood cells in the body’s immune system, which play a critical role in the fight against cancer,” Tummala said.

Boosting anti-cancer immunityThe researchers aim to work around these caveats to boost the anti-cancer immunity by using diet and better designed drugs. Working in his Avera Health and Science Center lab, Tummala oversaw the development of AT-Platin, a derivative of cisplatin. Unlike cisplatin, AT-Platin does not attack white blood cells and is up to 10 times more effective in killing cancer cells in cell-based lab studies, Tummala said. The data is promising, but it is yet to be tested in animal models, cautioned Tummala.In the study, AT-Platin will be used in combination with SDSF2, a novel drug created by SDSU and Sanford researchers which that targets enzymes involved in lactate production. SDSF2 is shown to reduce the lactate levels in the tumor and enhance the efficiency of traditional cancer therapy. Similarly, preliminary studies done at Sanford Research by the Miskimins group on tumor-bearing mice using only a specially designed low-carbohydrate diet have shown “significantly reduced serum glucose levels, reduced tumor lactate levels, reduced tumor growth and enhanced survival after chemo/radiation,” Tummala reported.

The low-carbohydrate diet is being formulated by Sanford Profile, which is the for-profit research arm of Sanford Health. The novel drugs—SDSF2 and AT-Platin—have been developed by Guan and Tummala at the SDSU college of Pharmacy.

The study will look at a mouse model of head and neck squamous cell carcinoma. However, the researchers believe results will be applicable to other solid tumors, including skin, prostate, breast and lung.