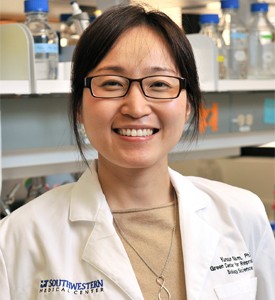 The Pew Scholars Program supports top U.S. scientists at the assistant professor level by providing funding to tackle some of the world’s most pressing health problems at the start of their independent research careers.

Dr. Nam, Southwestern Medical Foundation Scholar in Biomedical Research, is elucidating how non-coding RNAs work and is identifying new avenues by which to develop therapeutics.

“Only about 2 percent of the transcribed genome is estimated to code for protein. We want to understand how the rest of the transcribed genome, the non-coding RNAs (ncRNAs), work,” she said. “We are particularly interested in ncRNAs that are involved in the regulation of gene expression and that impacts human disease, such as microRNAs, which can play important roles in the development of various human diseases including cancer.

“Knowing how microRNAs work and how they are regulated will provide the framework for us to discover ways to intervene and identify new therapies,” said Dr. Nam, who uses a wide variety of experimental approaches to study microRNAs.

“Dr. Nam is an outstanding scientist and is most deserving of this award,” said Dr. W. Lee Kraus, Director of the Cecil H. and Ida Green Center for Reproductive Biology Sciences, and Professor of Obstetrics and Gynecology. “Her research on the mechanisms of microRNA processing, which has led to surprising new insights into the regulation and function of these important molecules, has important implications for stem cells and cancer.”

The Cecil H. and Ida Green Center for Reproductive Biology Sciences, where Dr. Nam’s laboratory is based, promotes and supports cutting-edge, integrative and collaborative basic research in female reproductive biology, with a focus on signaling, gene regulation, and genome function.

Dr. Nam obtained her bachelor’s degree and Ph.D. from Harvard University, and completed fellowships at Harvard Medical School. She joins a community of more than 500 Pew scholars whose ranks include multiple recipients of Nobel Prizes, Lasker Awards, and MacArthur Fellowships. Pew Scholars are selected based on their proven creativity by a national advisory committee composed of eminent scientists.

“Scientific breakthroughs often come from seemingly unlikely origins, which is why it’s so important to give young scientists the freedom and the support they need to pursue their most creative ideas,” said advisory committee Chairman Dr. Craig C. Mello, a 1995 Pew scholar and a 2006 Nobel laureate in physiology or medicine. “It is our privilege to help these outstanding investigators pursue new research paths and work with peers across disciplines in order to advance biomedical science and ultimately benefit human health.”