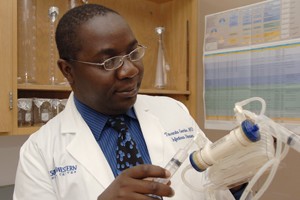 Newswise — Two new tuberculosis studies by UT Southwestern Medical Center researchers provide good news and bad news about the bacterium that infects nearly a third of the world’s population and a disease that kills nearly 2 million people each year.

The good news: A type of blood pressure medication shows promise at overcoming some drug-resistant tuberculosis, at least in the laboratory. The bad news: The Mycobacterium tuberculosis bacterium, which causes the disease, might be resistant to treatment in more people than previously thought.

Dr. Tawanda Gumbo, associate professor of internal medicine at UT Southwestern and senior author of the studies, said the research challenges current thinking about how the TB bacterium works in the body as well as how best to kill it.

His published findings come after the Dallas County Department of Health and Human Services announced this month that while the number of TB cases diagnosed in Dallas County dropped to 195 in 2009 from 219 a year earlier, the county’s rate of infection is still 1.5 times higher than the national rate.

In the first study, available online and in the April 15 edition of The Journal of Infectious Diseases, Dr. Gumbo and his colleagues used an experimental apparatus to simulate the way TB bacteria grow in the human lung. When they exposed the bacteria to drugs commonly used to treat the disease – ethambutol and isoniazid – the bacterial cells activated a cellular mechanism that pumps each drug out of the cells. The pumping action enables the rapid emergence of high-level resistance to the drugs whether administered together as well as individually, Dr. Gumbo said.

“We treat TB with multiple drugs essentially to protect each other from resistance, but yet we’ve been puzzled with why you find resistance to both drugs together,” Dr. Gumbo said. “Our findings make sense – it is more efficient from the bacteria’s viewpoint to employ the same mechanism get rid of multiple attackers, whether they strike alone or at the same time.”

Resistance was drastically reduced, however, when the researchers gave the blood-pressure drug reserpine – which is known to block this pumping action – to the TB cells before administering ethambutol and isoniazid.“There is already a known solution to this problem,” Dr. Gumbo said. “Hopefully now we can reduce resistance to TB treatment drugs.”

Current TB treatment uses multiple drugs simultaneously, in hopes of preventing drug resistance. The next step in his research, Dr. Gumbo said, is to test all the first-line drug treatments together with the pump blocker in humans.

If first-line drugs won’t work to kill TB, the person is said to have multidrug-resistant TB and doctors proceed to second-line treatments, which are usually more expensive and more toxic and take longer to work, Dr. Gumbo said.

In Dr. Gumbo’s second study, available online and in the April edition of Antimicrobial Agents and Chemotherapy, the researchers found that more people might harbor drug-resistant TB than currently believed because tests that detect the TB bacteria’s resistance don’t account for variations in height, weight and other factors among TB patients.

Guidelines for testing whether a person is infected with a drug-resistant TB strain were developed more than 40 years ago. They involve determining the lowest concentration of a drug that will kill at least 95 percent of the TB bacteria in a patient. The TB is said to be resistant to the drug if more than 1 percent of TB still grows at that concentration.

Dr. Gumbo said those guidelines are useful for showing trends, but are not effective for predicting how an individual will respond to therapy.

Recommended drug concentrations and dosages, for example, don’t account for factors such as body weight, height, race and how much food a person ate before being tested.

“Science has evolved,” Dr. Gumbo said. “We have better tools now so we can do more and predict better treatment.”

In the second study, he again simulated TB in the human lung and virtually simulated eight clinical trials involving 10,000 patients. The computer simulation factored in pharmacokinetics (how a body handles a drug based on heterogeneous factors) to determine how likely a dose of a given drug is to kill TB.

Dr. Gumbo’s research team found that the concentrations typically used in practice are too low, leading people to think they have treatable TB, when in fact their disease might be resistant to common drugs.

“There is likely more multidrug-resistant TB than previously thought – possibly up to four times as much,” Dr. Gumbo said. “That means some people may be getting underdosed with medicine weaker than the disease, and they die.”

The next step, Dr. Gumbo said, is to confirm these computer-driven results in patients.

Dr. Gumbo’s research is funded by a 2007 National Institutes of Health Director’s New Innovator Award, which supports bold ideas from some of the nation’s most innovative early-career scientists.

Other UT Southwestern researchers participating in the research were Sandirai Musuka, research associate in internal medicine, and Dr. Shashikant Srivastava, postdoctoral researcher in internal medicine. Researchers from Texas Tech University Health Sciences Center’s School of Pharmacy also were involved in the study published in The Journal of Infectious Diseases.