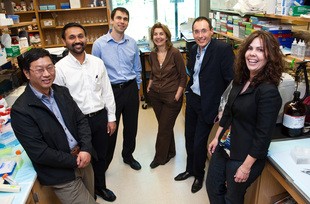 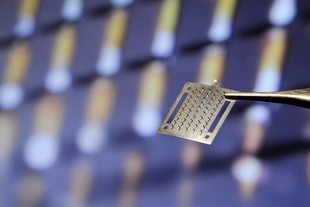 Image shows an array of microneedles against a microscope image. 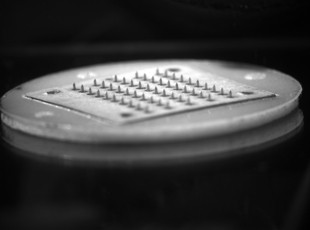 An array of microneedles in a patch could be used to administer the flu vaccine through the skin. Image shows a prototype patch of stainless steel microneedles. 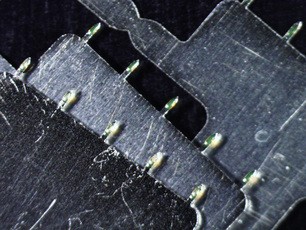 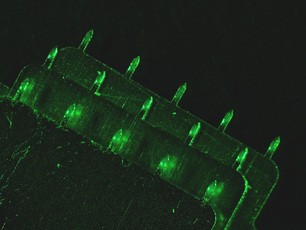 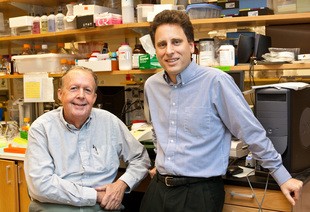 Richard Compans of Emory University (left) and Mark Prausnitz of Georgia Tech studied the effectiveness of a vaccine administered using a microneedle patch.

The research was published in the early online edition of the journal Proceedings of the National Academy of Sciences (PNAS). Another study by the research team on a different influenza strain was described in the journal Public Library of Science (PLoS) One.

The patches used in the experiments contained an array of stainless steel microneedles coated with inactivated influenza virus. The patches were pressed manually into the skin and after a few minutes, the vaccine coating dissolved off within the skin. The coated microneedle immunizations were compared to conventional intramuscular hypodermic injections at the same dose in another group of mice.

The researchers found that the microneedle vaccinations induced strong immune responses against influenza virus that were comparable to immune responses induced by the intramuscular, hypodermic immunizations. One month after vaccination, the researchers infected both groups of mice with a high dose of influenza virus. While all mice in a control group of unvaccinated mice died of influenza, all mice in both the hypodermic and the microneedle groups survived.

"Our findings show that microneedle patches are just as effective at protecting against influenza as conventional hypodermic immunizations," says Richard Compans, PhD, Emory professor of microbiology and immunology and one of the paper's senior authors. "In addition, vaccine delivery into the skin is desirable because of the skin's rich immune network."

Even though cutaneous immunization has been shown to induce a broad range of immune responses, and to be especially effective in individuals over age 60, this method has not been widely used because it has not been convenient and has required highly trained personnel.

"Unlike conventional hypodermic injections, microneedles are prepared in a patch for simple administration, possibly by patients themselves, and inserted painlessly onto the skin without specialized training," says Mark Prausnitz, PhD, professor in the Georgia Tech School of Chemical and Biomolecular Engineering and co-senior author. "These micron-scale needles can be mass produced using low-cost methods for distribution to doctors' offices, pharmacies and, possibly, people's homes." Other advantages of the microneedle patches could include more convenient storage, easier transportation and lower dosage requirements. Lower doses could be particularly important because flu vaccine production capacity sometimes is limited for seasonal vaccine, and a future influenza pandemic would require much greater production of vaccine.

Replacing a hypodermic needle with a microneedle patch also could significantly impact the way other vaccines are delivered, and could be particularly beneficial in developing countries. A microneedle patch could fit inside an envelope for delivery by the postal service and would occupy much less storage space. Patches also would increase vaccine safety by reducing the dangers of accidental or intentional hypodermic needle re-use.

The project team plans future immunization studies in other animal models, including guinea pigs or ferrets, before initiating studies in humans. Also, more studies are needed to determine the minimum vaccine dose needed for full protection.

In 2007 the NIH awarded a $32.8 million, seven-year contract to Emory, along with the University of Georgia, to establish the Emory/UGA Influenza Pathogenesis and Immunology Research Center. The center is working to improve the effectiveness of flu vaccines through a number of different projects studying how influenza viruses attack their hosts, how they are transmitted, and what new immune targets might be identified for antiviral medicines.

Prausnitz and his colleagues have been working since the mid 1990s to develop microneedle technology for painless drug and vaccine delivery through the skin. The Georgia Tech team has also developed manufacturing processes for microneedle patches and tested the ability of the needles to deliver proteins, vaccines, nanoparticles, and other small and large molecules through the skin.

Other authors of the papers are Emory microbiologists Ioanna Skountzou and Chinglai Yang, and first authors Ling Ye, Qiyun Zhu, Dimitrios Koutsonanos, and Maria del Pilar Martin from Emory and Vladimir Zarnitsyn from Georgia Tech. Other authors and contributors were Yulong Gao, Lei Pan, and Zhiyuan Wen from Emory, and Harvinder Gill and Sean Sullivan from Georgia Tech.

Caption: Image shows an array of microneedles against a microscope image.

Caption: An array of microneedles in a patch could be used to administer the flu vaccine through the skin. Image shows a prototype patch of stainless steel microneedles.