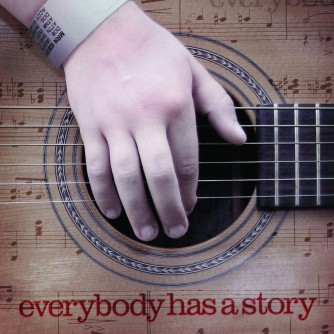 Everybody Has A Story, a collection of songs penned by Monroe Carell Jr. Children’s Hospital at Vanderbilt patients and sung by some of Nashville’s top recording stars, is slated for release May 14.

Newswise — Heartfelt songs penned by a group of patients of Monroe Carell Jr. Children’s Hospital at Vanderbilt while working with their music therapist are being released May 14 worldwide on a compilation CD featuring some of Nashville’s top recording stars. Artists Kix Brooks, Melinda Doolittle, the Fisk Jubilee Singers, Vince Gill, Amy Grant, Faith Hill, Alison Krauss, Maura O’Connell, Johnny Reid, SHEL and Phil Vassar breathe life into songs written by patients Austin Bagby, Ethan Carpenter, Courtney Gaoette, Erica Kilburn, Amy Overton, Gigi Pasley and Christopher Weber, along with music therapist Jenny Plume. “Everybody Has A Story” is a selection of songs written by patients over the past six years, each song the result of a clinical music therapy session involving the patient and Plume. The patients who participated were treated for a variety of chronic illnesses such as cancer and cystic fibrosis, two were heart transplant recipients, and one was hospitalized for pneumonia. Plume helped patients shape their thoughts and feelings into lyrics and a melody. Some lyrics were crafted out of a story idea, and some were created by long discussions about the patients’ feelings and situations. The song topics range from serious to fun and silly. “Sometimes we wrote about a real life experience, other times I would ask questions and the answers would make the lyrics, sometimes we used their poems,” Plume said. “So, it was very collaborative, with me trying to draw those ideas and words out of them. “I hope they will go on to know that they can do anything, they can create things, and hopefully music will always be in their lives. “For those patients who have passed on, this will be a legacy to celebrate their lives,” Plume said.

The CD will benefit the Julian T. Fouce Music Therapy Fund, founded at Vanderbilt in 2007 by Tom and Maria Fouce in memory of their son, Julian, a great lover of music. Julian died in 2005 after a long battle with leukemia. Plume’s idea of making a CD to celebrate her patients’ talents mixed well with Tom Fouce, a Music Row recording engineer who approached his industry contacts to see if there was interest in having the songs brought to life by professional artists. The artists enthusiastically agreed to donate their voices and time. “I’m very excited about how the CD turned out. The songs are really good, especially considering that all of these kids are novice songwriters,” said Tom Fouce. “There is some very real subject matter in the lyrics and the artists all did a fantastic job. We had top-notch musicians, engineers and producers involved and I couldn’t be happier with the result.” For each recording the patient or members of the patient’s family had the opportunity to experience the studio and meet the artist. Gigi Pasley, a four-time cancer survivor, was treated for acute myelogenous leukemia and osteosarcoma, and had two bone marrow transplants. She said she will never forget watching her songs come to life in the studio. “I got to see Amy Grant, Faith Hill and Johnny Reid. They were very nice. They tried to do it the way I wanted it to be done,” Gigi said. “Writing poetry, writing songs is how I get my emotions out in a healthy way. Sometimes it’s hard for me to talk about my feelings, so this is how I get them out.” Gigi’s mother, Jessica Pasley, remembers how music therapy helped her daughter. “When I think about what music therapy did for Gigi, I see it as part of her treatment,” she said. “There were days when she was not interested in anything. I felt that where mommy couldn’t help, music helped her.” “Everybody Has A Story” is currently available for pre-order at Amazon and will be available May 14 worldwide at all digital retailers. The CD will be available at music retailers throughout the United States and Canada. Visit EverybodyHasA-StoryCD.com for more information, including a video chronicling the making of the CD with artist and patient interviews.