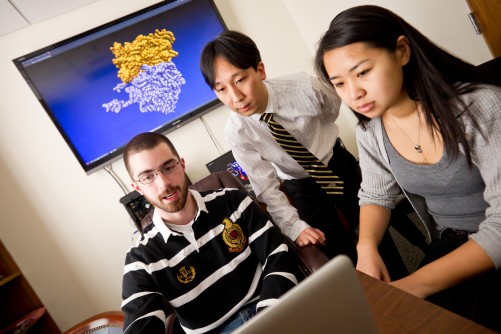 Newswise — The cure for cancer comes down to this: video games.

“If it wasn’t for gamers who kept buying these GPUs, the prices wouldn’t have dropped, and we couldn’t have used them for science,” Cho says.

Now he can see exactly how the cells live, divide and die.

And that, Cho says, opens up possibilities for new targets for tumor-killing drugs.

Cho’s most recent computer simulation, of a critical RNA molecule that is a component of the human telomerase enzyme, for the first time shows hidden states in the folding and unfolding of this molecule, giving scientists a far more accurate view of how it functions. The results of his research appear in the Journal of the American Chemical Society. Cho worked with colleagues from the University of Maryland and Zhejiang University in China for this study.

The human telomerase enzyme is found only in cancerous cells. It adds tiny molecules called telomeres to the ends of DNA strands when cells divide – essentially preventing cells from dying.

“The cell keeps reproducing over and over, and that’s the very definition of cancer,” Cho says. “By knowing how telomerase folds and functions, we provide a new area for researching cancer treatments.”

A new drug would stop the human telomerase enzyme from adding onto the DNA, so the tumor cell dies.

Cho, an assistant professor of physics and computer science, has turned his attention to videogaming technology and the bacterial ribosome – a molecular system 200 times larger than the human telomerase enzyme RNA molecule. His research group has begun to use graphics cards called GPUs to perform these cell simulations, which is much faster than using standard computing.

“We have hijacked this technology to perform simulations very, very quickly on much larger biomolecular systems,” Cho says.

Without the GPUs, Cho estimated it would have taken him more than 40 years to program that simulation.

Now, it will take him a few months.