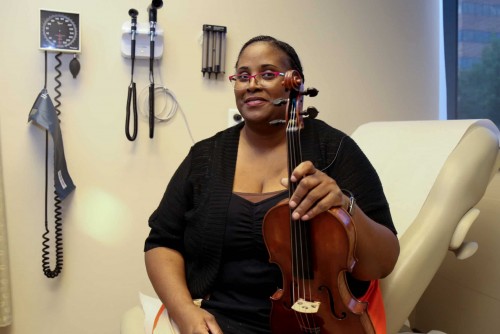 Alventena Cobb of Conway has played the violin for more than 30 years. 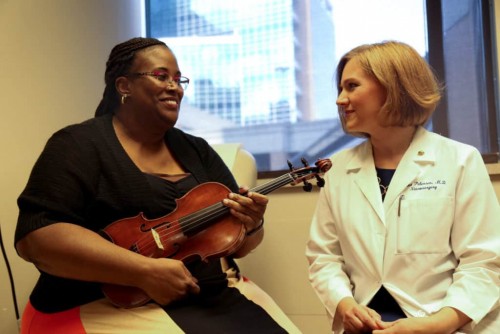 “I feel like we’re friends first. She’s always treated me like she knew exactly what I was going through.” – Alventena Cobb says of her surgeon, Erika Petersen, M.D.

Newswise — Alventena Cobb of Conway is a professional musician. She’s played the violin for more than 30 years and has instructed many students. Cobb uses her instrument as a method of expression. So when a shoulder injury prevented her from picking up her bow and strings, she felt incomplete.

In 2007, Cobb had an injury that landed her in a wheelchair for seven years. After surgery, she developed an inflammatory condition called complex regional pain syndrome (CRPS). CRPS typically happens after a traumatic injury and affects the nervous system. It often causes severe pain in one limb like an arm, leg, hand or foot.

Her local physician insisted in 2014 that she was too young to be in a wheelchair and that he knew someone who could help her.

“I didn’t believe him at first. But then he put me on a trial for a neuro stimulator and it worked,” Cobb said. “It was amazing to not have pain for about a week.”

The doctor referred Cobb to Erika Petersen, M.D., a UAMS associate professor of neurosurgery and director of functional and restorative neurosurgery.

“I first met Alventena when she had problems in her leg that stopped her from being able to walk,” Petersen said. “For that, we placed a spinal cord stimulator in her lower back to treat the pain in her leg.”

“It worked almost immediately,” Cobb said. “After about six months, I didn’t need a wheelchair or a walker. After one year, I was walking without my cane.”

A spinal cord stimulator, Petersen says, is like a pacemaker for the nervous system. Thin wires called leads are placed outside the spinal cord delivering small electrical pulses that mask the feeling of pain.

“In the case of someone with chronic pain the stimulator can drown out or block the pain messages from ever getting to the place where they become recognized in the brain,” Petersen said.

With the opioid crisis, it has become especially important to find other ways of dealing with pain than taking medication, and many patients find this option a relief.

“Many of my patients who have had chronic pain for seven to 10 years on average have tried all sorts of medicine and treatments,” Petersen said. “The spinal cord stimulator is often welcome relief.”

The stimulator is unique because patients have an opportunity to try it before they opt for the surgery.

A few years after the spinal cord stimulator helped her leg pain, Cobb had surgery on her shoulder. She later started feeling the effects of CRPS again. This time the pain was in her shoulder, hindering her from being able to hold a violin.

She went back to see Petersen who implanted a second stimulator in her cervical spine. After several weeks of recovery, Cobb was able to hold her instrument again. She’s now playing and teaching lessons.

“It’s an uplifting feeling,” Cobb said. “Not only to be back to teaching, but to develop back some of my techniques. I have been able to play again. This gives me hope that I will soon be back up to auditioning level and performance level.”

To Cobb, Petersen is more than a physician. She says she’s grateful for her surgeon’s sympathy and understanding.

“I feel like we’re friends first. She’s always treated me like she knew exactly what I was going through. She’s had my best interest at heart and her concern felt personal. It’s not just another procedure to her.” 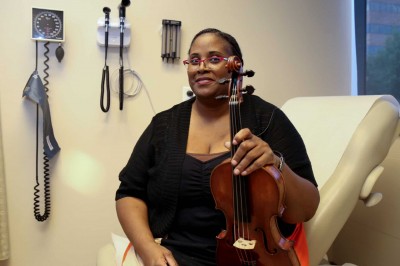 Caption: Alventena Cobb of Conway has played the violin for more than 30 years. 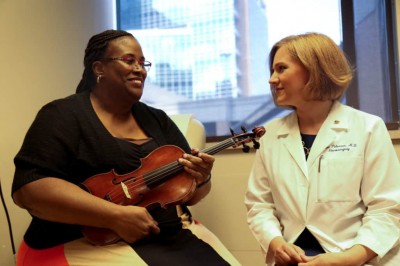 Caption: “I feel like we’re friends first. She’s always treated me like she knew exactly what I was going through.” – Alventena Cobb says of her surgeon, Erika Petersen, M.D.