‘We Use Every Second of Our Day’: 3 Stories of International Women at UVA Darden 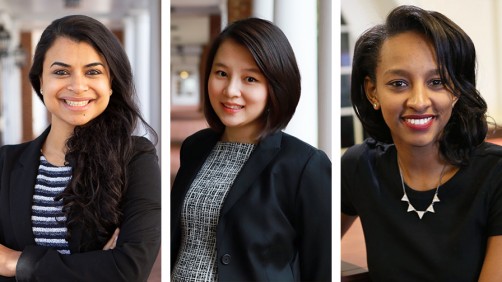 The full-time MBA student body at the University of Virginia Darden School of Business is composed of roughly 39 percent women, and about one-third of the class was born outside of the United States.

At the overlap of the two groups are scores of women with international backgrounds — leaders in and outside of the classroom playing a critical role in enhancing the School’s vaunted student experience and burgeoning global reputation. As International Women’s Day approaches on 8 March, The Darden Report presents the stories of three such women who chose to earn their MBA at the School.

"I have never been this productive in my life."

Originally from Ethiopia, Meti Aberra (Class of 2020) has lived and worked in the United States for nearly a decade, but she still remembers the academic culture shock of her early days at Smith College, when the memorization-heavy learning style she was accustomed to was replaced instead with an encouragement to think critically, ask questions and posit her own solutions.

“That was a huge shock for me and a learning curve,” said Aberra. “Once I got the hang of how the process worked, I loved it, because it was not about absorbing what the text book had to offer. It was: How much can you think about these topics?”

A biochemistry major and economics minor as an undergraduate, Aberra joined a health care startup after college, and found herself drawn more to the entrepreneurial aspects of the venture than the biochemistry elements. She began to consider an MBA, and an effusive Darden alumna helped put the School on her radar at a multischool showcase event in the Washington, D.C., area.

“The alumna was extremely passionate about Darden,” Aberra said. “She wanted to keep talking after the event, and gave me her calendar and said reach out anytime. That told me a lot of what I needed to know about Darden, which is, it’s the people.”

Midway through First Year, Aberra said she feels “very, very challenged” by the work, but in a constructive way.

“It feels like I’ve been here forever, only because there is so much that happens on a daily basis,” said Aberra, who was recently elected incoming president of the Darden African Business Organization and will intern with PepsiCo during the summer. “We use every second of our day. I have never been this productive in my life.”

She has also taken a leadership role in the classroom, serving as a section rep, a role she said is more accurately called as a “section enabler,” doing what she can to ensure the classroom remains a place where the learning environment is protected and the tone is set for respectful, spirited discussion.

Aberra is also showcasing elements of her heritage to the Darden community. Aberra teams up with her cousin to run a YouTube channel devoted to Ethiopian cooking, and won the best dish prize at the Darden Global Food Festival for tibs, a spicy beef dish. Along with a friend, she also hosts a podcast, the Injerger Podcast, devoted to the international student experience in U.S. higher education.

The overriding message? Stay focused on your goals, but be open to the new experience.

“There is this opportunity to be exposed to so many new things,” Aberra said of the potential path for international students. “There is a level of discomfort because you are being asked to push your knowledge sphere and your comfort level interacting with other people, but when you do, your mind is so much more open because you know who you are and where you are coming from. Once you have gotten through that barrier, it’s a great experience because you can literally walk into a room and talk to anyone you want.”

"This is not an experience where you can get by being passive."

Freyan Soonawalla (Class of 2019) spent four years at UVA as an undergraduate, where she fell in love with Charlottesville and threw herself into the experience, becoming president of an international mentoring program, serving as a resident adviser and leading the tutoring program with the volunteer organization Madison House, among other roles.

“It was a whole new cultural and academic environment, and I was surrounded by incredibly driven and diverse classmates,” said Soonawalla, who was born in India and spent her childhood in Oman. “While anxious and overwhelmed at first, it pushed me to organically take on leadership roles and contribute to the UVA community.”

After seven years in the financial services industry in New York, Soonawalla decided to pursue an MBA.

“I went to UVA, but I had never actually been to Darden,” said Soonawalla. “I sat in on a class during a visit and saw that it was its own unique experience but still felt very inclusive in the broader UVA community.”

Soonawalla said interactions with Darden students, a group she described as “grounded, humble and welcoming,” further convinced her that if she was going to embark on a demanding MBA program, this was the group she wanted to surround herself with.

Now vice president of international student affairs for the Darden Student Association (DSA), Soonawalla speaks frequently with prospective students. One message: Darden students come to the School in large part because of the community of collaboration and inclusivity — they want to be a part of it, and then they perpetuate it.

They also want to work hard and speak up.

“This is not an experience where you can succeed by being passive,” said Soonawalla. “By virtue of the case method, Darden forces us to think like a manager with every case and to develop business recommendations. It is also a daily exercise in real-world prioritization — balancing the demands of academics, leadership activities, recruiting and socializing with peers.”

Soonawalla is also a cheerleader for Charlottesville, which she says provides an ideal balance of metropolitan amenities and small-town convenience.

“It’s a peaceful city but with enough activities to give you a welcome break from all the studying,” said Soonawalla. “It appeals to every type of hobby or extracurricular activity.”

In addition to her leadership position with the DSA, Soonawalla is a portfolio manager for the Cavalier Fund of Darden Capital Management, the student investment group managing about $15 million of the School’s endowment, an experience that built on her previous career working for a hedge fund.

“From being one step removed, I‘m now a portfolio manager researching and analyzing companies that we think will generate outsized returns for our fund,” Soonawalla said. “This real world experience has been pretty awesome.”

Boosted by her experiences at Darden, she will go to work with the investment bank Evercore after graduation.

Vivian Hu’s (Class of 2020) first experience in the United States was memorable for all the wrong reasons. An 18-year-old exchange student coming from China to study at Boston University, Hu arrived in Boston after midnight in the middle of a snowstorm. Taking a taxi to a Super 8 motel, Hu said she wasn’t aware of the practice of tipping, leading the miffed driver to fetch her bags from the trunk, throw them in the snow and speed off. Hu called her parents and cried, wondering what she had gotten herself into.

Things got better from there.

Following time at Boston University, American University and George Washington University, she held accounting jobs at PricewaterhouseCoopers and Marriott International, where Hu led a team reviewing hundreds of deal arrangements related to Marriott’s merger with Starwood. However, Hu wanted to understand operations and learn how to drive strategy.

“I wanted to go to a school that has a small program because I wanted to get involved,” Hu said. “I wanted to build a personal relationship with classmates and professors.”

Living in the Washington, D.C., area, Hu imagined she’d explore another part of the country for her MBA, but after attending an admissions event with a case discussion led by Professor Martin Davidson, Darden sprung on to her shortlist.

“That resonated with my style of learning — the vivid discussions with classmates and professors instead of lecturing,” Hu said. “I also liked that Darden was setting up students to be overall business leaders, building solid fundamentals for future business growth.”

Hu’s plans for business school were shaken when she became pregnant, however, with a due date in November — right in the middle of one of the busiest times of the year for Darden students.

Hu recalled “freaking out” about the prospect of having a baby and juggling recruiting and academics. Assistant Dean for Student Affairs Sarah Elliott smoothed her path to Darden, Hu said, doing “all these little things to help set me up” and introducing her to other moms and moms-to-be who had been through a similar experience.

It was a sign of the support that would continue to come from the community, including professors and students.

A small example: Hu said she didn’t have time to plan a baby shower and was resigned to not having one. One day, she walked into class to find that her classmates had long been planning to surprise her with one.

“My entire class threw me a baby shower and really made me cry,” said Hu. “They are the best people.”

Hu and her husband welcomed daughter Lindsay in mid-November, and Hu took a week off before returning to class and recruiting. She will intern at Microsoft this summer, and plans to build her career in China after graduation. For now, though, she’s enjoying the experience at Darden and tightknit community.

“Some Chinese students, they never have had the experience of studying in the U.S. When talking in the classroom, they might speak a little bit slow or be nervous about expressing their ideas,” Hus said. “At Darden, everyone is very patient, including the professors. Everyone says, ‘Take your time. Don’t be nervous.’ We have this very nice aura in the classroom.”

And just as she heard from others MBA mothers when considering Schools, Hu is now able to advise people in a similar situation.

“If there is anyone in the same boat, thinking about pursuing an MBA while having kids, I know it’s hard, but at Darden you can do it, because you have all of the support.”