ZOOMING INTO AN OPEN STAR CLUSTER YIELDS UNEXPECTED RESULTS This movie takes a closer look at Hubble's image of NGC 6791, one of the oldest and largest open clusters known. The detection of white dwarfs that vary in age, leads astronomers to rethink the theory that stars found in these clusters develop at the same time from a large clouds of interstellar dust and gas. 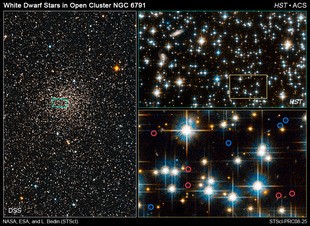 In studying the dimmest burned-out stars in globular star cluster NGC 6791, NASA's Hubble Space Telescope has uncovered a paradox: three different populations of stars exist in an object where all the stars should have formed at the same time out of an interstellar cloud of gas and dust. [Left] -- This is a ground-based telescopic view of NGC 6791, located 13,300 light-years away in the constellation Lyra. The green inset box shows the view with Hubble's Advanced Camera for Surveys. [Top right] -- The full Hubble Advanced Camera for Surveys field is full of stars estimated to be 8 billion years old. Two background galaxies can be seen at upper left. [Bottom right] -- A blow up of view of a small region of the Advanced Camera for Surveys field reveals very faint white dwarfs. The blue circles identify hotter dwarfs that are 4 billion years old. The red circles identify cooler dwarfs that are 6 billion years old.

Newswise — Imagine having three clocks in your house, each chiming at a different time.

"The age discrepancy is a problem because stars in an open cluster should be the same age. They form at the same time within a large cloud of interstellar dust and gas. So we were really puzzled about what was going on," explained astronomer Luigi Bedin, who works at the Space Telescope Science Institute in Baltimore, Md.

Ivan King of the University of Washington and leader of the Hubble study said: "This finding means that there is something about white dwarf evolution that we don't understand."

After extensive analysis, members of the research team realized how the two groups of white dwarfs can look different and yet have the same age. It is possible that the younger-looking group consists of the same type of stars, but the stars are paired off in binary-star systems, where two stars orbit each other. Because of the cluster's great distance, astronomers see the paired stars as a brighter single star.

"It is their brightness that makes them look younger," said team member Maurizio Salaris of Liverpool John Moores University in the United Kingdom.

Binary systems are also a significant fraction of the normal stellar population in NGC 6791, and are also observed in many other clusters. This would be the first time they have been found in a white-dwarf population.

"Our demonstration that binaries are the cause of the anomaly is an elegant resolution of a seemingly inexplicable enigma," said team member Giampaolo Piotto the University of Padova in Italy.

Bedin and his colleagues are relieved that they now have only two ages to reconcile: an 8-billion-year age of the normal stellar population and a 6-billion-year age for the white dwarfs. All that is needed is a process that slows down white-dwarf evolution, the researchers said.

Hubble's Advanced Camera for Surveys analyzed the cooling rate of the entire population of white dwarfs in NGC 6791, from brightest to dimmest. Most star clusters are too far away and the white dwarfs are too faint to be seen by ground-based telescopes, but Hubble's powerful vision sees many of them.

White dwarfs are the smoldering embers of Sun-like stars that no longer generate nuclear energy and have burned out. Their hot remaining cores radiate heat for billions of years as they slowly fade into darkness. Astronomers have used white dwarfs as a reliable measure of the ages of star clusters, because they are the relics of the first cluster stars that exhausted their nuclear fuel.

White dwarfs have long been considered dependable because they cool down at a predictable rate-the older the dwarf, the cooler it is, making it a seemingly perfect clock that has been ticking for almost as long as the cluster has existed.

NGC 6791 is one of the oldest and largest open clusters known, about 10 times larger than most open clusters and containing roughly 10,000 stars. The cluster is located in the constellation Lyra.

Other members of the research team are Santi Cassisi of the Collurania Astronomical Observatory in Italy, and Jay Anderson, of the Space Telescope Science Institute.