When It Comes to Babies Learning Language, the Eyes Have It 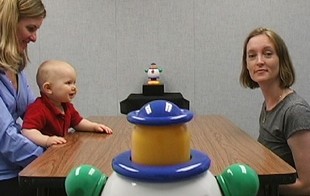 In top photogrpah, researcher Rechele Brooks, right, shifts her eyes from a 12-month-old infant to the toy in the foreground. In bottom photo, the infant follows her eye movement to the toy. 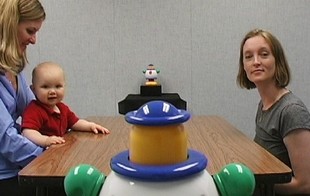 Newswise — Infants begin pulling off an amazing feat sometime in the final three months of their first year of life. They learn an important social interaction by following the gaze of an adult, a step that scientists believe gives babies a leg up on understanding language.

University of Washington psychologists Rechele Brooks and Andrew Meltzoff have pinpointed this developmental step as beginning somewhere in the 10th or 11th month of life, and have found that infants who are advanced in gaze-following behavior before their first birthday understand nearly twice as many words when they are 18 months old.

Writing in the current issue of the journal Developmental Science, Brooks and Meltzoff provide further evidence for the importance of eyes in human social interactions and trace how gaze-following develops in infants. Three years ago they reported that 12- 14- and 18-month-old infants are much more likely to look at an object when a person turns toward it with open eyes rather than closed eyes.

"Our work shows that babies can look where an adult is looking but that it isn't easy, particularly at home where there are a lot of distractions," said Brooks, who is a research associate at the UW's Institute for Learning and Brain Sciences.

Brooks and Meltzoff refer to the behavior of a baby (or an adult) looking where another has just looked as "gaze-following." Psychologist have known for some time that among adults detecting the direction of another's glance is a crucial component of human social interaction.

"This line of research is important because following another person's line of sight is crucial for understanding the emotions of other people and, as we are now showing, learning about language," said Meltzoff, who is co-director of the institute and a professor of psychology.

The new study is part of an effort by UW researchers to understand the development of gaze-following in babies. To do this, they tested 96 normally developing infants. There were 32 infants at each of three ages, 9, 10 and 11 months. Equal numbers of boys and girls in each age group were randomly assigned to eyes open or shut conditions.

Each infant was seated in a parent's lap, across a small table from a researcher. Parents were instructed not to move their head or talk during the experiment. The researcher played with an infant before placing two identical toys on pedestals to the left and right of the table. Then the researcher resumed playing with the child before starting four head-turning trials. In the trials the researcher made eye contact with the infant before silently turning her head toward either the toy on the left or the one on the right. In the eyes-open condition, the researcher kept her eyes open and turned her head from the child to one of the toys for about seven seconds before turning back to the child. The procedure was the same in the eye-closed trials, except the researcher shut her eyes before turning toward one of the toys and didn't open them again until she was facing the infant.

In a follow-up interview when the infants were 18 months old, parents were asked to check off on a list how many words their child understood.

There were marked differences in the babies' ability to gaze-follow based on age. The 9-month-olds turned their heads toward a toy nearly as often in the closed-eyes condition as in the open-eyes conditions. However, the 10- and 11-month-olds looked at a toy significantly more often when the researchers turned with her eyes open than when she turned with her eyes closed.

About one-third of the infants in the open-eyes condition also made simultaneous sounds such as "ah" or "hmm" when they engaged in gaze-following. Babies at this age are unable to speak but can make very simple sounds. Typically developing babies experience a burst of language between 18 and 24 months of age.

"The sounds they are making are very simple, but some children are looking and making these sounds spontaneously," said Brooks. "They are creating a social interaction or a link. There seems to be something special about the vocalization when they are looking at the toy. They are using social information to pick out what we are focusing on. They can't vocalize words, but they are carefully watching where we are looking. We think they are using social information and getting a boost in figuring out the social and language world together."

"Although the babies are too young to talk to us, those individual babies who are most attuned to our eye gaze are the same babies who pick up language faster more than half a year later," said Meltzoff. "This is a fascinating connection between the social and linguistic world and suggests that language acquisition is supported by preverbal social interaction.

"To do this a baby has an important social regularity to master: follow mom's eyes and you can discover what she is talking about. This study shows that babies first master this social information between 10 and 11 months of age, and it may be no coincidence that there is a language explosion soon thereafter. It is as if babies have broken the code of what mom is talking about and words begin pouring out of the baby to the parents' delight," he said.

The UW researchers are following the same group of babies to see if gaze-following and vocalization at an early age predict increased language understanding and use at 24 and 30 months of age.

The National Institute of Child Health and Human Development, the Tamaki Foundation, the Virginia Merrill Bloedel Hearing Research Center, the Talaris Research Institute and the Apex Foundation, the family foundation of Bruce and Jolene McCaw, supported the research.

High-resolution images from this release can be downloaded at http://www.uwnews.org.