Will the Real Godzilla Please Show Up?

What kind of monster will emerge in the latest reincarnation?

Sound bites about the nature of Godzilla by Jason Jones, assistant professor of Japanese at UWM. 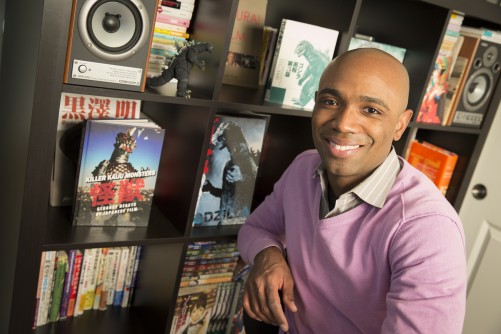 In advance of the new Godzilla film being released this week, Jason Jones, who is writing a book about the Japanese monster, explains Godzilla's changing nature.

Newswise — So which is it? Is Godzilla – the giant, reptilian monster of Japanese movie fame – a good guy or a bad guy?

Since Ishirō Honda’s first film in 1954, the creature has been both. That isn’t so surprising, says Japanese film scholar Jason Jones.

Sprung from man’s misuse of nuclear weapons, Godzilla was intended by its creators to be a reflection of human behavior, forcing us to struggle with our own emotional and ethical conflicts, says Jones.

So it will be interesting to see how the upcoming new film will portray the King of the Monsters on his 60th anniversary, he says.

“Godzilla is an anomaly among monsters,” says Jones, who teaches Japanese and Japanese culture at the University of Wisconsin-Milwaukee (UWM). “He’s fun but scary; entertaining but serious; Japanese but international. Compared to other silver-screen creatures, Godzilla has proven the most popular.”

The fact that he’s the most like humans is the key to that enduring appeal, says Jones.

“This to me is one of the most important things about Godzilla: Reconnecting him to that original narrative that allows humans to look at ourselves in the mirror and ask these difficult but very important questions: Are we doing what responsible humans should be doing?”

The human issues that are embedded in the stories – war, pollution, technology – make Godzilla a global cautionary tale.

“The first Godzilla came out almost a decade after the conclusion of WWII. It really is about Japan being dragged back into wartime,” says Jones. “So Godzilla is this threat of war, this threat of the past that just won’t go away. He also represents the development of nuclear technology – that power for life to change in an instant.”

Many people today are more familiar with the zany Godzilla than the serious one, says Jones, who is writing a book, “Godzilla is Dead: How Capitalism Killed Meaning in the Monster.” In fact, students who take his Japanese film courses, he says, are struck by how sad it is when the monster dies at the end of the original film.

Godzilla has become so ingrained in popular culture it is difficult to keep the seriousness of the original message alive. Even in Japan, where his presence is ubiquitous, younger people aren’t much more knowledgeable than their American counterparts when it comes to Godzilla’s beginnings.

The blockbuster American Godzilla film came out in 1998, recasting the monster as a one-dimensional iguana-beast of destruction.

“The producers were competing with “Jurassic Park II: The Lost World,” so they wanted to make Godzilla look larger than the Tyrannosaurus rex. If you’ve ever seen the preview for the 1998 film, Godzilla actually steps through the ceiling of the museum and onto the Tyrannosarus rex, as if to say, ‘You’re nothing; I’m so much bigger than you are.’”

Jones was still in college at the time, and he began to wonder how this version fit into the greater body of Japanese films about Godzilla. He found that the creature’s purpose had strayed far away from the original.

Current events, however, could provide an opportunity for the new movie to remind viewers why Godzilla came to be in the first place. Since the earthquake that hit Japan last year and the ensuing radiation leak at the Fukushima nuclear power plant, the country is revisiting its relationship with nuclear power, says Jones.

“Films have the power to make us think,” he says. “Of course, we want the eye candy too, but there’s a need as humans for us to constantly review and assess whether we’re acting in our own best interests. This film has the potential to do that.”