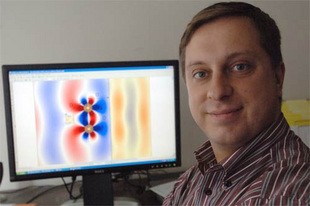 Newswise — Recharging your laptop computer -- and also your cell phone and a variety of other gadgets -- might one day be doable in the same convenient way many people now surf the Web: wirelessly. Marin SoljaÄiÄ‡ of the Massachusetts Institute of Technology will present research by himself and his colleagues Aristeidis Karalis and John Joannopoulos on the physics of electromagnetic fields, showing how wireless energy could power future gadgets. The MIT team is also working on demonstrating the technology in practice. The work will be described on Tuesday, November 14 in San Francisco, at the 2006 American Institute of Physics Industrial Physics Forum (IPF), which will be co-located with the Nanotechnology Topical Conference at the AVS 53rd International Symposium & Exhibition at the Moscone Center West.

Like many of us, SoljaÄiÄ‡ (pronounced Soul-ya-cheech) keeps forgetting to recharge his cell phone, and when the thing is about to die it starts to complain with an unpleasant noise. "Needless to say, this always happens in the middle of the night," he said. "So, one night, at 3 a.m., it occurred to me: Wouldn't it be great if this thing charged itself?" The experience got the MIT scientist thinking hard to see if any of the physics principles he knew of could turn into new ways of transmitting energy.

After all, scientists and engineers have known for nearly two centuries that transferring electric power does not require wires to be in physical contact all the way. Electric motors and power transformers contain coils that transmit energy to each other by the phenomenon of electromagnetic induction. A current running in an emitting coil induces another current in a receiving coil; the two coils are in close proximity, but they do not touch.

Later, scientists discovered electromagnetic radiation in the form of radio waves, and they showed that another form of it -- light -- is how we get energy from the sun. But turning light into electrical power is notoriously difficult, and requires a direct line-of-sight between transmitter and receiver. Radio waves, and especially microwaves, can be used to transfer energy, which can then be picked up with an antenna. But transferring energy from one point to another through ordinary electromagnetic radiation is typically very inefficient, and can even be dangerous: The waves tend to spread in all direction, so most of the energy is lost to the environment.

However, SoljaÄiÄ‡ realized that the close-range induction taking place inside a transformer -- or something similar to it -- could potentially transfer energy over longer distances, say, from one end of a room to the other. Instead of irradiating the environment with electromagnetic waves, a power transmitter would fill the space around it with a "non-radiative" electromagnetic field. Energy would only be picked up by gadgets specially designed to "resonate" with the field. Most of the energy not picked up by a receiver would be reabsorbed by the emitter.

In his talk at the IPF's "Frontiers in Physics" session, SoljaÄiÄ‡ will explain the physics of non-radiative energy transfer and the possible design of wireless-power systems.

While rooted in well-known laws of physics, non-radiative energy transfer is a novel application no one seems to have pursued before. And figuring the details was not easy, SoljaÄiÄ‡ said, something he and his colleagues did through theoretical calculations and computer simulations. "It certainly was not clear or obvious to us in the beginning how well it could actually work, given the constraints of available materials, extraneous environmental objects, and so on. It was even less clear to us which designs would work best."

With the proposed designs, non-radiative wireless power would have limited range, and the range would be shorter for smaller-size receivers. But the team calculates that an object the size of a laptop could be recharged within a few meters of the power source. Placing one source in each room could provide coverage throughout your home.

SoljaÄiÄ‡ is looking forward to a future when laptops and cell phones might never need any wires at all. Wireless, he said, could also power other household gadgets that are now becoming more common. "At home, I have one of those robotic vacuum cleaners that clean your floors automatically," he said, "it does a fantastic job but, after it cleans one or two rooms, the battery dies." In addition to consumer electronics, wireless energy could find industrial applications, for example powering freely-roaming robots within a factory pavilion.

Headquartered in College Park, MD, the American Institute of Physics (http://www.aip.org) is an organization chartered for the purpose of promoting the advancement and diffusion of the knowledge of physics and its application to human welfare.