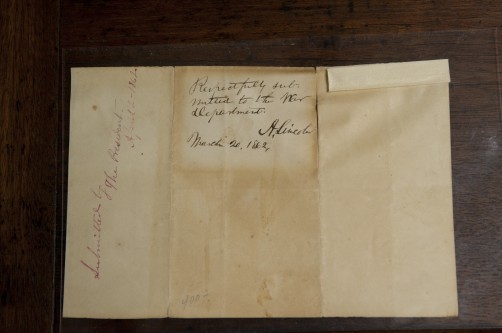 Newswise — When Western Illinois University's University Television (UTV) Associate Director Roger Kent looked a bit closer at a picture that had been hanging in his office for a few years, he noticed what looked like a signature belonging to the nation's 16th president. Curiosity got the better of him, so he contacted a Lincoln authority: the Abraham Lincoln Presidential Library and Museum in Springfield.

And Kent's hunch proved to be right: the framed portrait included a piece of paper signed by Abe Lincoln.

Many years ago, when the University Union Lincoln Room changed its decor, UTV acquired a number of Lincoln artifacts to be used as props for set design. One of the framed portraits was stored in the prop room for three years until Kent "rescued" it to decorate his Memorial Hall office.

"This piece has been hanging on my office wall for two years, and one day, something just made me really look at it. That's when I noticed a handwritten note bearing the Lincoln signature in a small window in the portrait," Kent said. "I sent a message with a scanned image to Library Curator Dr. James Cornelius, who at first glance said the note appeared to be authentic."

Last month, Kent drove 90 miles to Springfield for Cornelius to examine the note in person. It was there that Cornelius and other archivists verified that the note was authentic, with an estimated value of $15,000-$20,000. Cornelius' staff created a high resolution scan to include in their official database, but turned the note back over to Kent.

"I decided this was something that belonged in Western's Archives, so I got in touch with Archives and Special Collections Director Jeff Hancks and Senior Library Specialist Kathy Nichols. Of course, they were more than happy to have this piece for WIU's collection," he added.

"Roger bothered to take an interest in something that probably narrowly escaped a dumpster at one time, and he salvaged a priceless piece of history. Then he took it upon himself to have the signature evaluated by an expert, and finally, he returned the engraving and signature back to Western," she said.

According to Nichols, the document that Kent presented to Western's Archives and Special Collections isn't the first Lincoln-signed document that has at one time been housed at Archives, but it may be the most impressive. In the 1980s The Illinois Historic Preservation Agency launched the Lincoln Legal Papers project to document cases and legal actions in which Lincoln participated. In 1991, individuals from this group visited WIU's IRAD (Illinois Regional Archives Depository) and located an 1838 Fulton County case that contained six documents when Lincoln had represented a group of businessmen who lent money to a fledgling meat packing company. While Archives does have copies of these documents, the originals reside at the Lincoln Library and Museum in Springfield.

"What is important about the document that Roger gave to our collection is that it is from Abraham Lincoln when he was president," Hancks noted. "From the writing on the piece of paper, we can tell that Lincoln was enclosing some item to his War Department, then run by Edwin M. Stanton."

Since the document's discovery within the portrait of Lincoln, Nichols has been conducting research to find out how the engraving and signature came into the University's possession.

The WIU Archives and Special Collections is located on the sixth floor of the Leslie F. Malpass Library. Archives is open from 8 a.m. to 4:30 p.m. Monday through Friday.