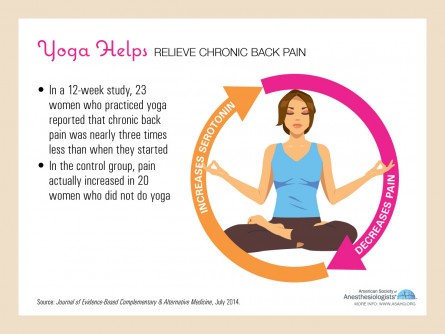 Newswise — CHICAGO – January 19, 2015 Despite the variety of effective treatments, and physicians who specialize in treating pain, women often suffer unnecessarily from conditions ranging from backaches to pain after cancer surgery, and also treat their pain with medications that may be ineffective and possibly harmful, according to a review of research related to women and pain by the American Society of Anesthesiologists® (ASA®). ASA conducted the literature review and issued the Women’s Pain Update to help raise awareness of the many options available to women for controlling both acute and chronic pain, and how a pain medicine specialist can help them choose the right treatment. Among other things, the studies showed that remedies such as music, yoga and rose oil are proven effective for several types of pain, that opioids are often used inappropriately, and that the type of anesthesia used during breast cancer surgery can affect how quickly and comfortably a woman recovers from the operation.

Physician anesthesiologists are doctors who focus on anesthesia and critical care medicine and are among the medical specialists who are experts in the subspecialty of pain medicine, seeing patients in private practices and pain clinics.

Donna-Ann Thomas, M.D., a member of ASA’s Committee on Pain Medicine, frequently sees women who have been suffering in silence for years, with conditions such as a type of back pain that can develop after childbirth, and chronic pain after breast cancer surgery.

“I can’t tell you the number of women I see who have been told they just have to live with the pain,” Dr. Thomas said of women who come to her with sciatica, a type of back pain that radiates down the leg. “It’s just heart breaking because many of these women have been suffering a long time. Women, especially older women, are less likely to speak up and seek treatment for their pain.”

Another common type of pain that often goes untreated is phantom pain after breast cancer surgery.

“It’s fairly clear-cut when someone has phantom pain after a limb amputation, but it’s often overlooked when a woman has the same pain after a mastectomy or lumpectomy and she suffers unnecessarily,” Dr. Thomas said.

Patients with pain are evaluated and then treated with a variety of therapies, sometimes in combination. These might include medications, injections, biofeedback and acupuncture. The goal is to get the patient’s pain under enough control that she can then participate in managing her own pain with physical therapy, exercise, and other lifestyle changes.

Among the findings in ASA’s review of studies involving women and pain are:

•Rose oil eases menstrual pain. In a study of 75 women, 25 massaged rose oil onto their abdomens to ease menstrual pain, the most common gynecologic complaint. Twenty-five used unscented almond oil and 25 did nothing for their pain. The rose oil group had significantly less pain.

•Yoga helps relieve back pain. After 12 weeks of yoga, women with back pain reported less pain. The women do didn’t do yoga reported their back pain was worse after 12 weeks.

•Opioids prescribed during pregnancy. 1 in 7 women were prescribed opioids for pain while pregnant, a practice that can be harmful to the unborn baby.

•Women and men respond differently to fibromyalgia pain. In a study of 747 women and 48 men with fibromyalgia, there were no gender differences in the amount of pain men and women reported. However, men were more likely than women to cope with pain by avoiding activity.

Just as there are physicians who specialize in treating conditions such as cancer, heart disease or allergies, there are specialists in treating pain. These physicians complete four years of medical school and further training in a specialty, such as anesthesiology, internal medicine, physical medicine and rehabilitation, psychiatry or neurology, followed by an additional year of training to become an expert in chronic pain. Women seeking pain relief from a specialist should confirm that the physician is certified in a pain medicine subspecialty by a member board of the American Board of Medical Specialties, such as the American Board of Anesthesiology.