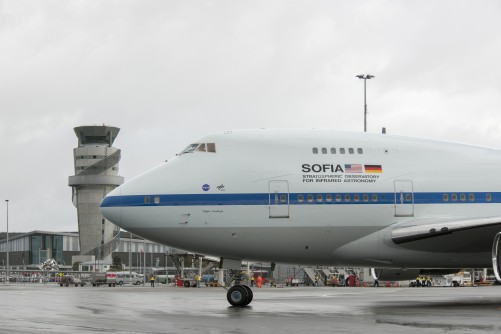 Some of the scientific data that will be collected May 5 and 7 during flights of the Stratospheric Observatory for Infrared Astronomy flights will be transformed into tactile graphics for youth who are blind or visually impaired. SOFIA is pictured here as it taxis to the Christchurch International Airport terminal in New Zealand in July 2013, on its first Southern Hemisphere deployment to study celestial objects difficult to see in the northern sky.

Newswise — A project at the University of Chicago’s Yerkes Observatory, which enables the visually impaired to almost literally touch the stars, will take flight May 5 and 7 aboard the Stratospheric Observatory for Infrared Astronomy.

Taking flight for the project is Vivian Hoette, director of education and outreach for Yerkes, and Ryan Lau, an astronomy graduate student at Cornell University who is using the Faint Object Infrared Camera for the SOFIA Telescope (FORCAST) to capture images of the cosmos in infrared. Hoette and Lau will collaborate to create tactile graphics of Lau’s scientific results, making it possible for youth who are blind or visually impaired to compare the properties of massive, dust-enshrouded stars at the center of the Milky Way galaxy.

“You take an astronomical image, make an inverse gray image, black-on-white background, adjust the contrast so that you can see the object of interest, then create a Braille label as well as a text label,” Hoette said of the process. Katherine Watson, a Yerkes journalism intern who is blind, will check the images for tactile clarity and check the Braille for accuracy. Watson will edit Lau’s descriptions to ensure that someone can explore the image through touch rather than sight.

Also flying aboard SOFIA on May 5 and 7 as Airborne Astronomy Ambassadors will be Marcella Linahan, a science teacher at Carmel Catholic High School in Mundelein, Ill., and Lynne Zielinski, of Long Grove, Ill., who is a Stars at Yerkes educator. Stars at Yerkes is a professional learning community organized by teachers associated with education and outreach at the observatory.

The ambassadors program brings teams of teachers aboard SOFIA to conduct research, implement classroom lessons based on their experiences and complete a plan to educate the general public.

Zielinski and Linahan applied to the SOFIA Airborne Astronomy Ambassadors program as a team intending to accomplish these goals: to help middle-school teachers to understand astronomy and teach it to their students, and to encourage girls to become interested in science, technology, engineering and mathematics (STEM) careers.

“There are a plethora of options available in STEM to be excited about,” Linahan said. She plans to bring back data gathered herself to show students. She also wants to help students understand what it takes to get SOFIA and other scientific investigations off the ground.

“This is the world’s only flying observatory,” said Zielinski, an active educator at Yerkes and retired physics and astronomy teacher at Glenbrook North High School in Northbrook, Ill. “We will be with the astronomers in the control room operating this amazing telescope. We want to learn as much about that process as possible.”

Linahan and Zielinski will use toy gyroscopes to help elementary and middle school students understand the telescope’s complex technical processes. The pair will do in-flight demonstrations that show what happens. Later, they will post the demonstrations on YouTube so that other teachers may use them for their classrooms.

“Airborne telescopes have a series of gyroscopes to keep them stabilized,” Zielinski said, as does the orbiting Hubble Space Telescope. “The gyroscopes balance the telescope so that it keeps pointing at the same spot. We want to bring toy gyroscopes aboard as a handy way of showing the technology within the telescope.”

SOFIA is a Boeing 747SP (special performance) aircraft fitted with a telescope more than 8 feet in diameter and designed to fly close to the edge of the atmosphere. The idea is to fly the telescope above the water vapor in the atmosphere. Water vapor blocks most of the infrared light emitted from astronomical events and objects. By flying to the very edge of the stratosphere, astronomers can image phenomena such as gas and dust clouds, planets and moons, and stellar winds from new stars.

SOFIA operations may wind down, at least temporarily, at year’s end because of federal budgetary concerns. NASA’s fiscal year 2015 budget request to Congress calls for SOFIA to be placed into storage next year unless the agency’s contribution to the project can be replaced. NASA is searching for potential partners interested in using the aircraft for scientific investigations or other potential uses.—Erin Fuller